Notes From The Lecture 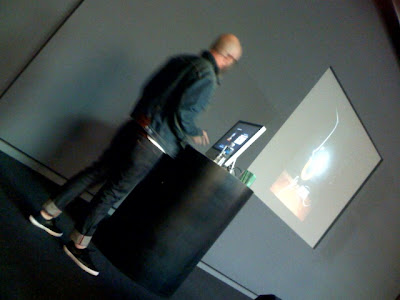 It was an exciting evening. AH kind of told his life story- how he got interested in music, magazine culture and photography...all the things that shaped him and led him to move to NY to be a photographer. The most interesting part for me was to see this evolution: his fashion work, which he was able to take pretty far and then pull the plug on and then how he came to eventually find the voice that he currently has and has become known for. I could have listened to a lecture about that chapter alone, really, because I think it is an important part in being a photographer...the shifting of gears and moving to the next level.

Anyhow...he then got into the power and importance of blog culture and how he cultivated that as a form of community. That was good stuff as well...but less about photography and more about this other thing. There was a message in there some where about how suddenly...with blogs and the net...the barrier of accessibility is gone. Everyone seems to be able to reach everyone...and the power and equality that has given us.

So...it was deep.I'd have enjoyed a lecture that was simply about his work, but that is for another forum. This was more on a grand scale...lots of topics covered.I gotta do a talk there in October...so I'm kind of taking notes and trying to figure it out myself....its a noisy venue and there is no easy way around that.He gave out free gifts which really seemed to turn people on...so I may bring a pinata or something.

thanks for answering the question tim , cheers . and tilting that shot to include andrew's turn-ups .

Sounds like a great talk - wish I could've seen it. I'm a big fan of Andrew's online work.

Thanks for sharing this, Tim -

I seriously wish I had been there, thank you for the recap. I am a HUGE fan of Andrew's work.