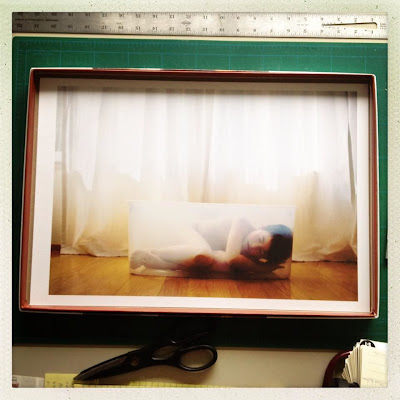 So happy to have a collector reach out last week to aquire Elijah In A Fairy Tale, 2008. Curiously enough, the payment came through on Black Friday.

I jumped up on the table to snap a photograph of the print before shipping it out.

That moment of course was documented as well. 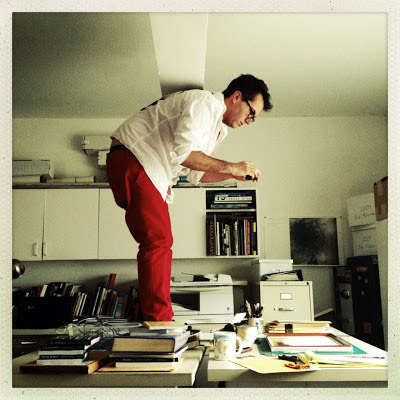 What Are You Thankful For?

Thanksgiving hit the day after we discovered The Drinkograph.

I couldn't think of a better arts-and-crafty type of assignment to toss out to Facebook friends to see what people came up with. The lazy hours of Thanksgiving need some focus, and sometimes these little directions flow nicely on this holiday.

After proposing this idea, I was brought back to reality by a friend who pointed out that this assignment has nothing to do with Thanksgiving. It wasn't family, it wasn't tradition...it was hinting at all sorts of things, all of them depressing.

Oh, she's right. It is. It has no holiday hook at all. But it's too late, I've already proposed it.

When the first image showed up, I started to feel the goodness, flowing generously from the cornucopia of the Internet to my FB wall. The pilgrims didn't have the internet, they didn't have iPhone. Instagram was years away. But there was a little bit of Thanksgiving spirit here, a little bit of creating and sharing, that seemed to feel like the holiday.

When You Hit Rock Bottom, Please Remember Your Camera. 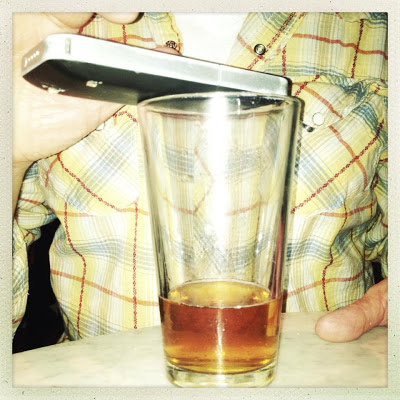 Well that was a truly terrible week.

Already the end of the week and it was only Wednesday. And here we are staring at the holiday hitting us in 24 hours. Please.

I met a friend at a bar, as cliched as that sounds. I hate beer. I hate bars. I like none of these things, but I am lonely and bored. I meet my friend and he is not doing better than I. He needs a project, he needs inspiration. Usually I enjoy being in that role, but today I've got nothing to give.

Happy Hour. A beer arrives. I don't even want this. Oh, I'll try it.

I balance the camera phone on the top of the glass and push the button. That's really all that is left to photography anyhow. Why not ? Who's to say no?

First image looked like an amniocentesis. The second image, with an app that makes circular images, looked like a solar eclipse shot through a telescope. I like them. At least for now...and the rest of Happy Hour.

What more could I ask? The history of the first Drinkograph started today. 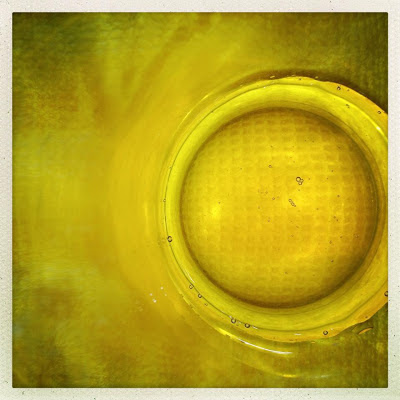 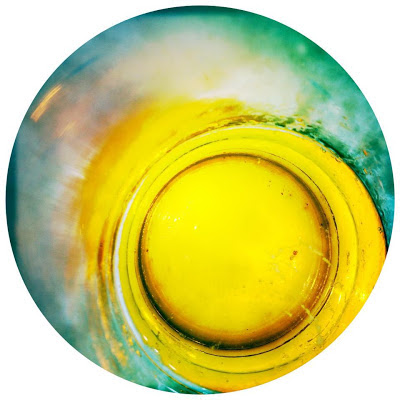 Posted by Timothy Archibald at 10:13 PM No comments: 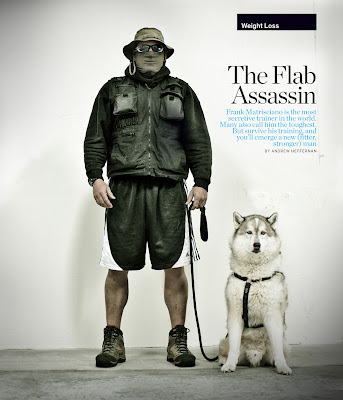 Amidst a story about basketball phenom Blake Griffin, I was introduced to Frank Matrisciano. Blake was the future star and Frank was the man behind the scenes.

Frank agreed to pose for a photograph, and this was the deal: he'd have a disguise and I would accept that.

I was relatively excited about having to photograph this guy who carried his persona so far...I just had to respect that. Unfortunately I could not make a great photograph of him. No matter what I did it just seemed that the pieces never would fit. Here we had this guy in this outfit, we had this beautiful dog, we had a simple space. Try what I did, I just could not connect with this guy, the situation, or anything really. Finally I just stopped shooting.

The magazine had something they could run, but I could never understand what went wrong. The other day Men's Health asked to see the work on Frank and I dug back into it. This picture seemed to represent everything that went wrong: here is the guy, here is the dog, here is the space...and nothing finds any harmony. Nothing fits together and nothing relates. It's almost as if the dog is as disconnected as everything else- from me, from his owner, from everything going on. Now, time has past, and I might actually appreciate it for those things. Or appreciate it a little more.

Who is Frank? Below I excerpted an interview written by Geoff Calkins for The Commercial Appeal in Memphis. Enjoy: 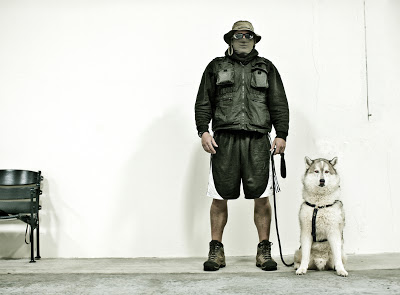 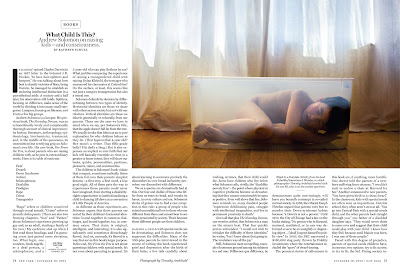 Inspired use of Elijah In A Fairytale, 2009 in this week's New York.

A book review of Andrew Solomon's new book Far From The Tree.

Read the review by Kathryn Schulz in New York Magazine HERE.
Posted by Timothy Archibald at 1:43 PM No comments: 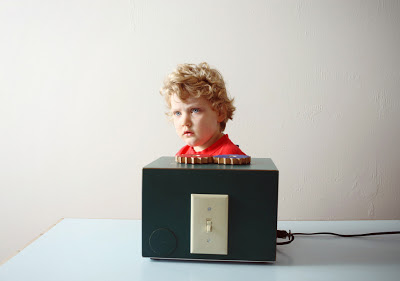 Recent conversations with Tidepool have led us to search for a kind of redefinition of what it means to hire Timothy Archibald. Lots of ideas on the table, but there is a specific kind of image we are starting to focus on.

I ran this idea past photographer Jamie Kripke the other day, spelling it out. He was silent. Then he asked politely:

Ok, then what happens? You introduce everyone to the New Timothy Archibald, 2013?

I certainly didn't like the sound of that. I quickly responded with :

Oh, well more like introducing them to Newly Evolved Timothy Archibald. It's not new and different, its more what I'm evolving into.

Kripke wasn't forthcoming. I interpreted his silence as enthusiastic support.

Going thru my files I came across this image from last year that never really saw the light of day...I don't think. Or it never made it into print. Originally shot for Scientific American, it's always had some intangible magic to me.

Reworked with a beautiful action courtesey of The Color Shop.
Posted by Timothy Archibald at 12:36 AM No comments:

Well Here We Are 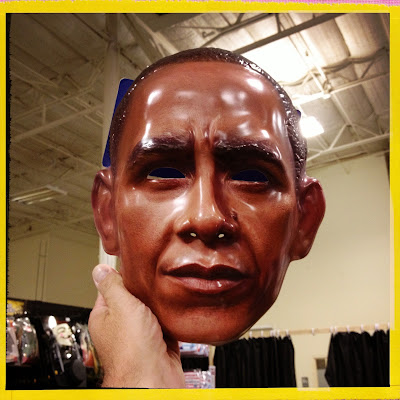 Well, here we are.
Congrats.
There is work to be done...
﻿
Posted by Timothy Archibald at 8:51 PM No comments:

The thing about Twitter is that it really has been a "game changer", as cliched as that sounds.
Access to people is more open than ever. Never would I be able to reach a corporate heavy hitter or a sports superstar to thank them for their time after a shoot, but here in the era of Twitter, I can find our Forbes cover subject Jack Dorsey, send a note thanking him for his time, get his reaction to the photograph, and then really see the wake in the aftermath of the images we created.
A few moments on Twitter got me onto the site of Mr. Tim Dorsey of MA Tech Services, a company specializing in mass spectrometer work. I'm assuming he is also the Dad of Jack Dorsey, our cover subject. Here on his Twitter is a stunning photograph made by Tim of a newstand that has the October issue of Forbes featuring his son. He arranged the magazines to display the cover in repetition...just such a great metaphor for the pride his Dad seems to be feeling at that moment. Beneath the image is a brief caption that includes the note "We bought all of them."
Later that week appears a photograph with a stack of the magazines, a copy of Freedom Manifesto by Steve Forbes, thoughtfully inscribed by Mr. Forbes himself. The signature reads "To The Dorseys- Who exemplify the best of free market creativity. With gratitude, Steve Forbes."
Why am I going on about this? Well Dorsey created Twitter. His Dad is using it to great effect. We shot Dorsey. We then got to get a peek into the way the shoot touched his parents, all via this platform their son helped create.
Technology can be a massive time suck and a negative energy force itself. But wow...when it gives you this, it feels good to see the positive as well.
Above photograph by Tim Dorsey, below photograph by Moira Forbes.

Posted by Timothy Archibald at 7:34 PM No comments: