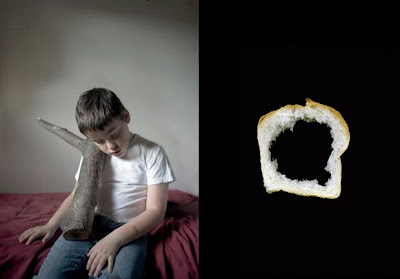 Back in April 100 Eyes published a portfolio of images from the Echolilia project and included this thoughtful interview by curator Andy Levin. Levin conducted the interview in bits and pieces over the course of May...I'd answer via email and blackberry while on the road. The interview led to some great feedback and a few invitations for future engagements....always a good thing with a new project. It was just Father's Day, the interview touches on parenthood, thus I'm taking this time to re-run it below.

Q: Timothy, you describe “Echolilia” as a collaboration with your son, Elijah. Can you tell me more about that?

A: Around the time Elijah turn 5 we started making photographs together. I’d kind of initiate it with some direction, he’d do something that seemed unexpected…something I’d never have been able to think of…we’d look at the images together on the digital camera and try to refine them…try to improve them, try to take them in other directions. The idea of turning the creative control over to a child, while I operated the camera, allowed me to make images that seemed to have this sense of discovery to me. There was also alot going on at the time with Elijah…behavior things that we couldn’t make sense of.

Q: Can you tell me a little more about him?

A: For sure. He was always a kid who went to the beat of his own drummer….had a fascination with doors, mechanical gears, things that had a repeating ritual involved with them. After the project was begun we had him tested and he was diagnosed as being on the autistic spectrum. It came as a surprise…he’s not what we think of as traditionally autistic. He is a real communicator, but I think these days the spectrum encompasses alot of things. My wife and I still don’t know if we really agree with the diagnosis some days. But I do feel that the question….the search to understand what makes him tick, combined with his unique way of being in the world has fueled the project and given it it’s shape and structure.

Q: It sounds as though this was your way of playing together? Was that part of the relationship here? How specific was he about the way in which he wanted to be photographed?

Q: Is communication an issue? What are Elijah’s verbal skills like?

A: No…this is a normal seeming kid who has a grand vocabulary and goes to public school and gets good grades…but he is different.

Q: So is the work autobiographical or fantasy, or a combination of both? Are these images about your son, or something else?

A: I guess I ask myself that question a lot. I always thought that the project had this element of role playing in it. My wife looks at the images and has always said that it looks like I’m trying to exert some type of control in the photos that I don’t have in real life…so I’m having us act it out for the camera.For me the work is about a relationship, and I always think of a relationship having three components: him, myself, and then all that is shared…the shared intangible. With the project I always saw the photographs as what we did together, the scans as my voice, looking objectively at the documents, and then the thing we get when we look at all of the stuff together is the channel, the tone that defines the project…the echolilia thing. There are feelings that go along with your relationships with your kids: powerlessness, idealism, and just these moments when those you are raising just seem so alien…so foreign. And moments of transendent beauty as well. In doing a series about a relationship, I didn’t want to short change it, or dumb it down. I wanted it to have the complexity of emotions, the range, and try to touch on the emotions we don’t have the words for yet.

Q: The image of Elijah in the plastic tub, how did that happen?

A: Around the time I did that shot I had been shooting Eli doing curious things with his body but the locations of the shots were just not thought out…its like I’d shoot him where he happened to be. I showed the work to a photo friend and she essentially said that I’d need to try to find locations that were more…intentional, more able to look metaphorical. It made sense. I had been noticing the light coming thru that window at that time of day and we had an empty large plastic toy container in the room. I think my wife had an appointment that afternoon, cuz I recall I picked up both kids from school, but had my camera and tripod out, hoping to make some photographs. We came home and ate lunch. I asked him if he wanted to make some photographs in the plastic container in the sunshine. He thought it looked interesting and stood in it and then we just tried different things: standing, hiding beneath it, sitting up in it. We then realized that it could contain him lengthwise if he curled up a bit. He got in that pose, clothed. We looked at it and I suggested he take off his clothes so it would look like he was like in an egg, and was about to hatch out. He took off his clothes and got in and started aligning his body in ways that looked like the final shot. ” Move a foot…lift your chin…now close your eyes…ok, this looks real nice. Come out and see what it looks like. ” We’d look at the images on the back of the camera, he’d see what it looked like, and try again. At some point we got it and ended. We didn’t try other ideas then, just moved on to other non photographic things. I think his younger brother was in the room trying to watch a video….so it was chaos, but we got it. And then, the nudity: I really think of these images trying to be archetypal , I want the feral child to be there. I don’t want to see a logo, a style, a t shirt with a ninja turtle on it. And then he’s in his school uniform alot, so it helps the idea of this looking like the child in someones brain or memory. Ahh…thats the goal.

Q: Over how long a period of time were these images made and where is this project headed?

A: We started midway thru his fifth year and now he is seven. The project is still going, we are still shooting, but I am trying to pause at this point and try to assemble the work into a book form with some text. Oh, I guess I should add that I’m pausing on the project to kind of evaluate it, see if the scans and photo idea works together, and try to come up with text that gives him a voice in the project. I’m using the format of a book to give it shape. Its more for the growth of the project than an attempt to get a publishing deal or something.

Q: You have a keen knowledge of the history of photography. How do you think your work fits in with that of other photographers who have done work with their family?

A: Emmet Gowin had shot his family in a series of photographs that always had this sense of intimacy that I never could understand or replicate until I had kids myself. It just had this sense of .hauntedness that made it seem like a childhood memory. I can’t replicate that, but there is some quality of memory I’m trying to tap into…like my own childhood memories. Elijah looks like me, so that may be fueling this all as well. Currently, I gotta say I respect the anxiety and sense of anxiousness in the family work of Tierney Gearon. In her work you can see the intimacy, but its wrapped up in this modern day angst, anxiety, mixed emotions that are honest. Its like anti- romantic, and it seems to give the complexities of the role of the parent its due. I mean, that’s what I see in the work, but maybe I’m projecting what I want to see. I want my project to tap into that anxiety, parent/child anxiety…and I think it does…but it needs to be more universal as well. These projects need to try to speak to everyone, not just people with kids. Gowin and Gearon hit that sweet spot for sure.

Thanks Timothy and good luck!

Thanks for posting this Tim! It answered a lot of questions I didn't know how to ask. Gerry

At kuala lumpur airport I am reading your article in photo journal coupled with Eli's photos. My heart goes out to you and am impressed by your courage and how you have managed to deal with the situation.
The one thing I didn't like maybe it is solely because I am a very sensitive person, is the fact that the photos are quite disturbing! Pliers in his mouth and his bare body... Another one where he is completely naked and in a plastic box was more disturbing than any amount of words can describe!
Where he has the vacuum cleaners hose next to his ear is appalling - again his chest is bare and he is laying on dirt... Am thinking any small insect can crawl up his neck, go in the ear... Bit his lip or ear....
I applaud however ur confessing in the National Geographic and saying working with him, I fid myself questioning boundaries! Am I his parent now or his collaborator?
I think enough with realizing and about time to act and do something about it! You are a parent first, and you honestly don't need a random reader to remind you that fact!
Regards,

I think enough with realizing and about time to act and do something about it!
Thanks for posting this Tim
Vegas Escortsp spot stimulators

After the project was begun we had him tested and he was diagnosed as being on the autistic spectrum. It came as a surprise
Pabrik Boiler steam
jual boiler steam vertikal
jual burner Gas Riello
jual boiler solar 500 Kg
jual pompa KSB Etanorm SYT
jual brner solar

hello blogger, the perfect page site and the speed of the crawl process that is very good for viewing and exploring the contents of the article is also convenient, hopefully the other bloggers can have a website like you
jual thermal oil Heater
Jual thermal oil Aspalt
Jual Hot water boil
Distributor Boiler steam
Jual Boiler batu bara