Why Are You Always Shooting Your Kid Laying On The Ground? 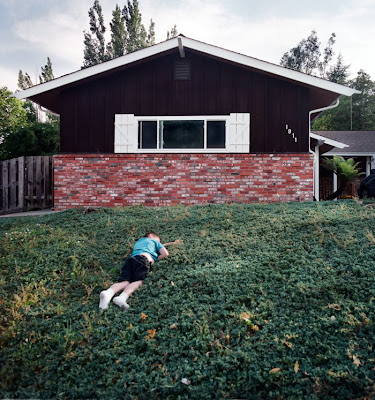 In this Echolilia project I've done a bunch of shots recently where my son is laying out on the ground and I'm staring down at him. In these shots his body seems heavy and weighty and his arms and legs seem to stretch throughout the frame...he just seems to have this mass. Some of the shots seem elegant...like the one with the chalk on the sidewalk, and then others seem to be trying to have this shock value, trying to emulate a feeling like you are just witnessing an accident of some sort. Then this one on the front lawn, it might be trying to be dreamy a little, but still carry this feeling of " there is a body out of place, what do we do now?". 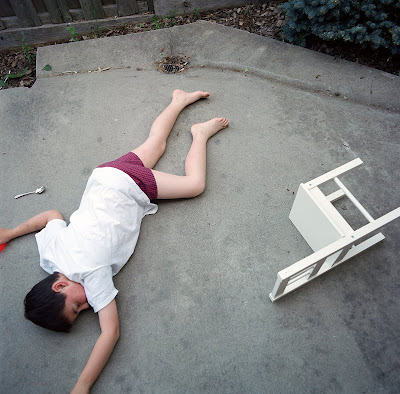 Like all projects, you run into patterns and ideas you are trying to work your way thru or perfect in the arc of the project...and for the past few months this has been one of them. Last year it seemed like he was smaller and we were always shooting this fetal-position-body-curled-up thing...it appeared a few times without planning it. The other night I was going thru some old books and I found this favorite book of mine that I got in 2005 titled "Drugs Are Nice" by Lisa Carver. The cover...there it was, that was the image that I've been trying to copy or emulate I think...right there on the cover. I remember loving that image when I saw it originally, years before the book was out. It looked so simple but so startling: Carver, in the street, probably in harsh afternoon light, laying down...maybe tragically, maybe peacefully...it is so hard to tell. Her legs...there is a small cut, some blood, but some soothing shaving cream as well. Is it a joke? It is real? No answer, but probably both. All apologies to the photographer Peter Norrman, but in my head, I imagine Carver told the photographer exactly what she wanted to do and he just did it. Looking at Norrman's site, it seems like it was more of a collaboration...he has alot of work in this vein. The subject was the performer, the photographer the document maker, and here is the end result. I'm sure this image was floating around in my brain for years...what it looked like and what effect it had on the viewer. It just took all of this time to bubble up to the surface. 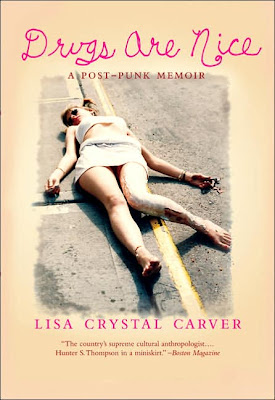 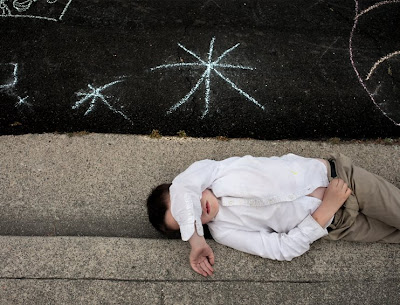 Posted by Timothy Archibald at 7:25 PM

Thanks for the insight into your creative process. I think the images of your son laying on the ground work and make a lot more sense when viewed in the context of a portfolio/project. To the casual reader of your blog these images might generate some WTF thoughts. Your son with the chalk in the background works no matter what the context. It's a magical photo.

This is weird because why doing shots like those, well it can be a different style maybe you're successful doing things like those but I prefer the common photos where I can see the planet's beauty.m0m

It is the first time that I find something like this. I didn't know that they like to stay in the floor.