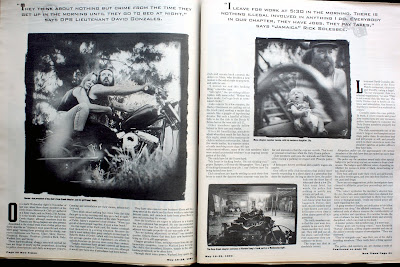 Going thru work for the slideshow, it was interesting to visit a time when newspapers really had space to burn and really celebrate photography. The 'net wasn't flowing like it is now, and the alternative press could really do some wonderfull stuff.

These are a couple spreads from a story that appeared in Phoenix New Times in May 1993, written by David Pazstor on the motorcycle club The Dirty Dozen.
m 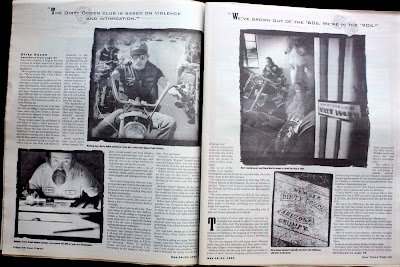 Posted by Timothy Archibald at 10:22 AM 6 comments: 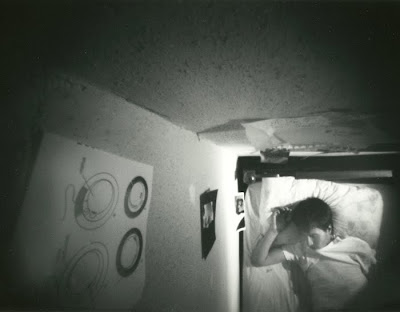 I hate digging thru old work, but thats what I'm doing trying to prepare for the lecture next Thursday. I'm not showing old stuff like this, but I need a blog post today...k?

I came across this image I made for a class in college in 1989. I was trying to copy work by Marc Chagall... romantic and surreal and dreamy but with photographs. I'm at the bottom pretending to be asleep. On the wall in descending order from foreground to backround is a diagram of a fertilized egg, a piece of pornography photographed from a movie screen, and a self portrait my girlfriend did of herself that she gave me.

What was it supposed to mean? Oh....I dunno....I think it was about trying to dig into one's subconscious or something...
Posted by Timothy Archibald at 10:46 AM No comments:

Everybody Is An Expert On One Thing 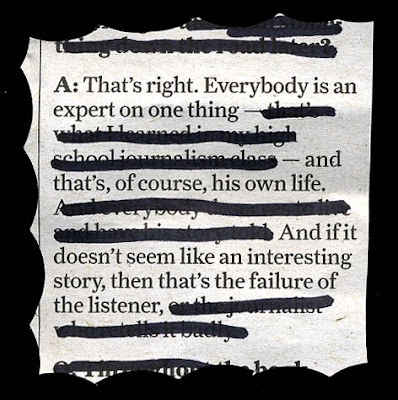 I just loved this quote today, from and interview in the San Francisco Chronicle with author William T. Vollmann by writer Justin Berton.
Posted by Timothy Archibald at 3:59 PM 3 comments:

Invisibility, DW and A Revelation

There are these periods when you and your work are electric and magnetic. Good photographs present themselves with little effort. Interesting jobs come to you via email and phone call when you aren't even hoping for them. Opportunities to be included in anthologies, exhibits, things of artistic merit seem to slide in from the universe. A picture resells, someone licenses something and you really have the feeling of the easy free money and artistic satisfaction that this job sometimes offers. And then there is the silence.
m
The silence usually sets in for a good month or so. I've had it happen before...its a yearly or occurrence...sometimes more. And I'm not referring to the economy. Its really coming from the universe. It is a period where no matter what you do, no matter how hard you try, you and your work is just utterly invisible. Big jobs fall thru. Small jobs disappear due to unknown circumstances. The creative well isn't dry...you can be creative, but you can not disseminate the information. Large scale promotional efforts truly yield nothing. It's like you bought an ad during the airing of the Superbowl and then there was a black out.
m
Right now I'm in the midst of The Silence. I'm embracing it and trying to be productive while experiencing the invisibility.

Oh, then there was the Dan Winters lecture the other night. My expectations were low...I had seen him speak a decade ago and had left disappointed. I hadn't learned anything new at that time...it was just a talented guy showing his great photographs. I learned no secrets, had no revelations. I attended this week just because it would be cool to see friends and stuff.
m
At the end I had a revelation...I think I learned a secret. The power of his portraits really comes down to the fact that he is this very down to earth grounded human being. He is so confident in his abilities that he comes off as ego less. A brief exchange at the end of the lecture made it clear to me: he can really be the beta, he can let you be the alpha...or let you be the equal, and that seems to create this instant trust, this instant intimacy. Of course he's got his own vocabulary with his technique....but that only goes so far, that's the packaging. The power of his portraits, the familiarity and commitment he gets from people comes from the guy. His technique has been very influential over the years, but the human stuff is the thing that no one has really been able to copy.
Posted by Timothy Archibald at 9:10 AM 10 comments: 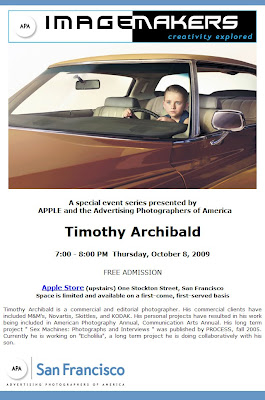 I'm giving a talk on October 8th and would love help spreading the word. If any of you all- powerfull bloggers would care to help it would be a good karma situation all around.

No one is making money, there is no profit motive. Its sponsored by SF APA and Apple and admission is free. I'll be talking about commercial photography cuz it's an APA event, but plan on focusing the talk on the importance of personal work, finding one's voice and the power of community...all this touchy feely stuff that has absolutely nothing to do with spreadsheets, data bases, or digital workflow.

Click on one of these announcements, download it and feel free to post it on your blog as we get closer. Oh, and then please come to the talk....! 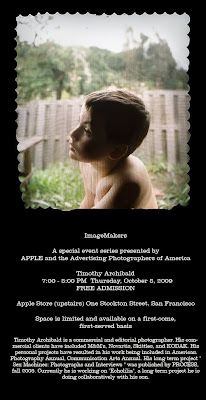 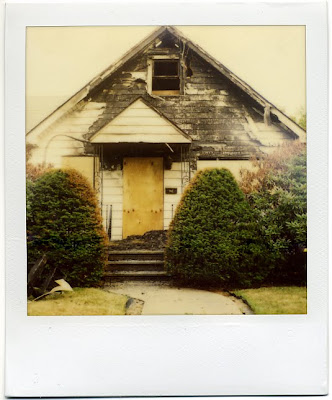 Posted by Timothy Archibald at 11:27 AM No comments:

Just Trying To Entertain You All, Part 2 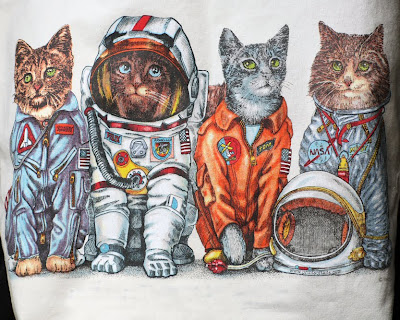 Ok...thanks for sending out the good vibes everyone.
Last week was about sending out the positivity and it was received!
m
My wife's parents came to help out.
This morning I got to photograph her Mom's handbag, above.
Posted by Timothy Archibald at 10:20 AM 1 comment: 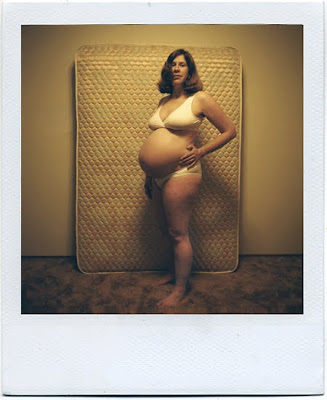 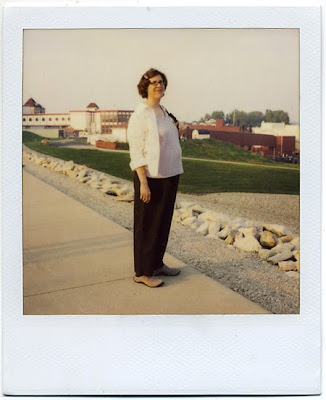 Posted by Timothy Archibald at 8:30 AM No comments: 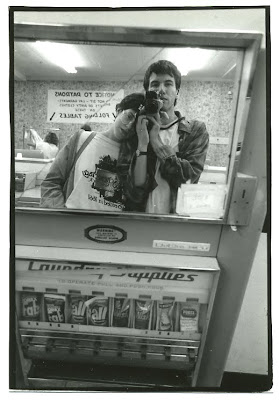 
Just for good luck, here is another one.
Posted by Timothy Archibald at 8:08 AM 3 comments: 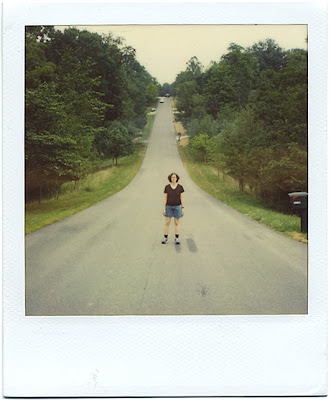 My wife Cheri got sick and had to be in the hospital for the past week. Bumming big time over here, but she is better now. Still not home though. I found these polaroids today and they look a little melancholy. I thought I'd post 'em. 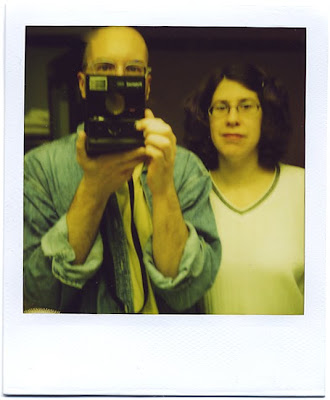 I'm Just Trying To Keep You All Entertained 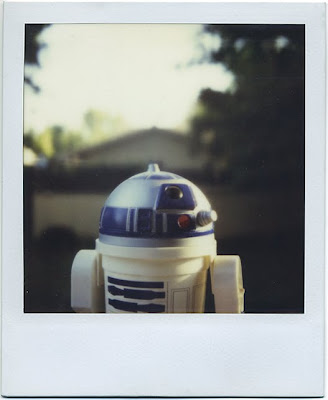 CS: The problem is I keep hearing this 80's radio station playing in my head. It never turns off. Its got an African American disc jockey introducing the songs and talking between the commercials. And the music is all 80's stuff: U2, Eddie Money, REM...that type of thing. I mean, do you hear it now?

CS: And my cell phone song keeps going off. I hear it behind me in the room. Is it going off?

TA: No...I only hear the fan and stuff. It's really quiet.

CS: Could you tell them about the radio?

TA: Yah, for sure.
Posted by Timothy Archibald at 9:45 AM No comments:

So...what is going on?
m
I've been wrapped up going over the tapes from this story I shot last week...the subject was heavily influenced by writer Philip K. Dick. To understand the subject and his work I felt I had to research PKD. That's been occupying me, trying to make sense of it and see where it all fits in. Get familiar with PKD HERE.
m
Then, I'm into a blog called The Ingoing by Traci Matlock and Ashley MacLean. Sometimes its photographs, but at its best it personal thoughts and ideas, like a book of inspirations the authors carry around with them. Try it...see if you like it HERE.
m
The other day a friend came over to eat lunch and look at my Echolilia project. When he left I was kind of bummed...he didn't really say anything tangible. I have nothing to leave the table with, I thought. It was fun to hang out, but it was a waste as far as Echolilia went.

I was getting ready for a trip the next day and was distracted. Over the next few days the meat and potatoes of the visit came thru. I realized what it was all about:

Photography just describes things. It doesn't do a good job addressing issues. It just shows things. Sometimes, when its done well, the showing of things ends up addressing issues as well. In Alec Soth's Niagara, the images he made of people, note, hotels, hotel rooms, they all describe the place of Niagara Falls, N.Y., but in the end the carry the punch of commenting on and addressing the frustrations of Love. Lots of photographers have tried to describe the place, this place of Niagara Falls, N.Y. but Soth was the first one to take all the parts, add them up, and come up with something that actually described an intangible.

If you want these images of your son and the scans to add up to something greater, something that transcends, you need to figure out what you are trying to make them transcend to. What is the bigger thing you are trying to address?
Posted by Timothy Archibald at 3:01 PM 3 comments: 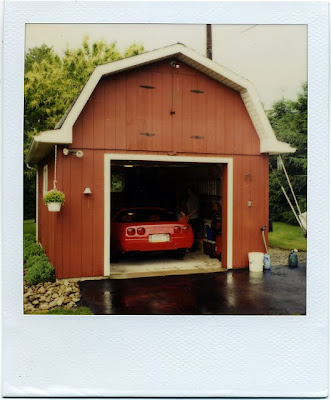 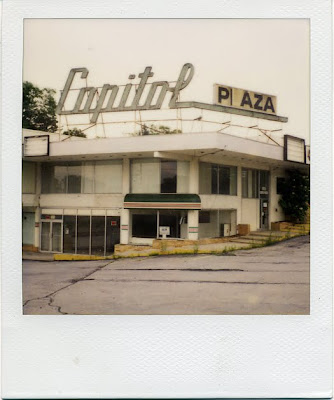 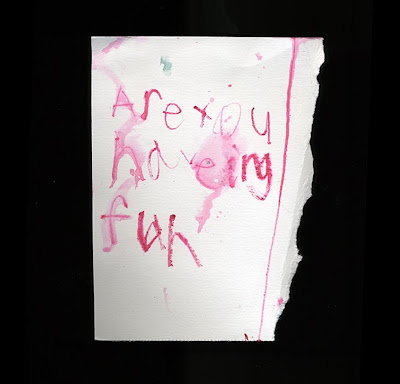 Posted by Timothy Archibald at 10:25 PM No comments: