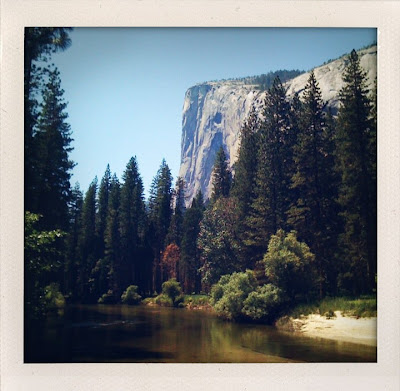 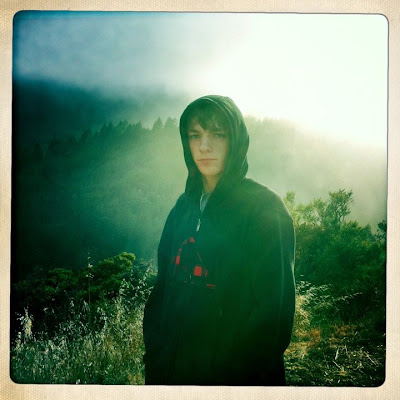 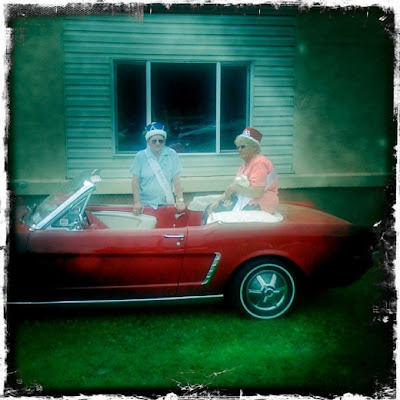 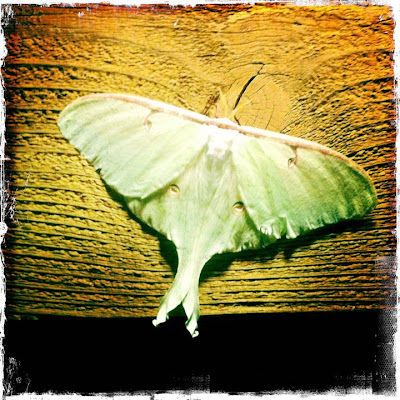 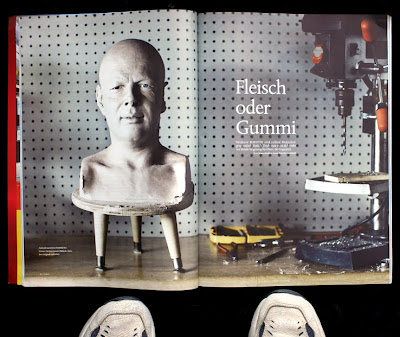 Neon Magazine in Germany cranked out a giant XXL anniversary issue in this month's August issue. 11.5 x 15 inches on thick glossy paper stock ...it feels like you are looking at a catalogue.
This shot of David Hanson's Philip K. Dick sculpture never made it in the edit of the original story in Discover Magazine, so I was psyched to see it as the elegant opener of the Neon edition.
Posted by Timothy Archibald at 7:50 AM 1 comment: 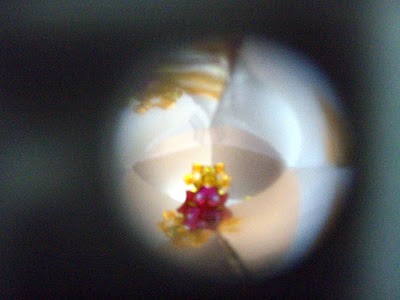 Home Made Kaleidoscope, 2010 by Eli Archibald
Posted by Timothy Archibald at 9:41 AM 2 comments:

Dinner With Randal, Kate and Erik 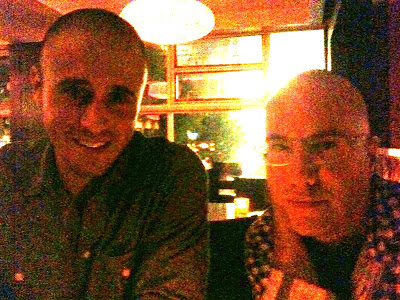 r.f. and t.a., july 2010
m
Had one of those wonderful moments of photographic generosity that happens rarely enough to still feel super special when it does indeed happen. Randal Ford from Austin, Texas was in town and somehow summoned up his own photographic think-tank for the night made up of myself, Kate Chase and Erik Almas. The very grounded sense of humanity in Randal's work is what always stuck out to me and here he was, just as human and approachable as a person in one of his images. Our own small chapter in the history of commercial photography was written that evening on Fillmore Street and we all headed home with something to think about. 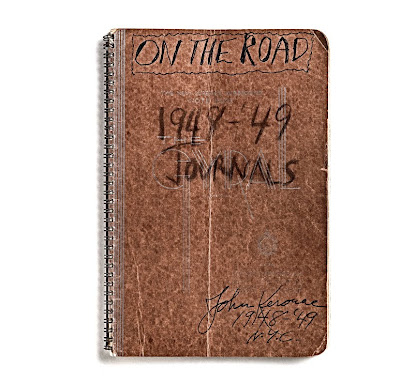 photograph by randal ford
Posted by Timothy Archibald at 2:48 PM No comments: 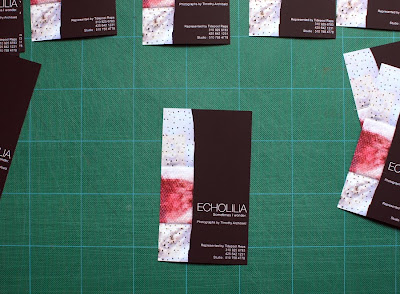 Mass producing the Echo Bookmark, as conceived of by Diane Eames of Eames Marketing.
Posted by Timothy Archibald at 12:50 PM No comments:

That Moves As You Play 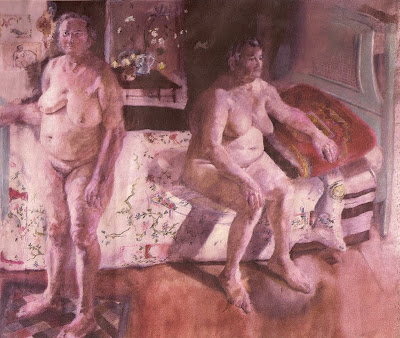 Any photographer shooting their kids...or really their own family, is now aware of the NY Times story about the controversy surrounding the work of Larry Rivers and his daughters. Rather than quote it all, jump in and read it HERE. Photo bloggers are on it HERE. Bad vibes all around, with his daughter Emma Tamburlini essentially stating that it contributed to her anorexia and "wrecked her life". I'm not doubting it, just quoting it. Above is a celebrated painting by Rivers of his Mother-In-Law, naked.

Terry Gross interviewed Rivers in 1992. They discuss a controversy that occured when a nude painting of his son was exhibited:

Gross: Your son was very embarrassed. He was relieved when the police removed the painting. He says, to this day, he has a twinge of embarrassment when he sees it. Did you realize that at the age of fourteen it would be so embarrassing for him to have his nude portrait publicly displayed?

Rivers: No, no. He may have felt that way, and maybe I even thought about it, but I didn't think it was too much to ask of a child, truthfully speaking. And, you know, he did it. He knew I was a painter, that's what I do, and that he would be useful. If he was embarrassed, I'm sorry. You know, so what?

OK...so his attitude is harsh and uncaring and doesn't help things....but I suspect he enjoyed courting controversy. I feel that having kids is this thing that affects any artist who finds themselves in that situation. Making art about that experience is just a natural extension of what they are up to. Alot of times showing this work out of context, showing it before it is complete really throws people off to what it is all about. What are our obligations? I guess it depends on whom you are trying to please...is the art more important than the relationship? Did the subject have a voice in the process? I have no answers, but really anyone who has shot their kids has asked these questions of themselves and their work.

Here, I've got ECHOLILIA. It's in a physical book and I'm selling it and it's filled with images of my son...the whole project hinged on his involvement. There he is on the cover, head in a trash can. I must admit, I was a little gun shy when the book came in to the house. What if he has some negative reaction? Is he gonna appreciate this and still think it's cool? Is he going to care either way? And if he digs it, will that change as he gets older? The access one has to family is unlimited, but the power of the relationship is the thing that carries the price for all of this access. What's all good now might not really be that way at another time. There was a song by the band "X" that had the chorus This is the game that moves as you play. That line always pops in my head as I try to get a handle on these things.
Posted by Timothy Archibald at 3:47 PM 5 comments: 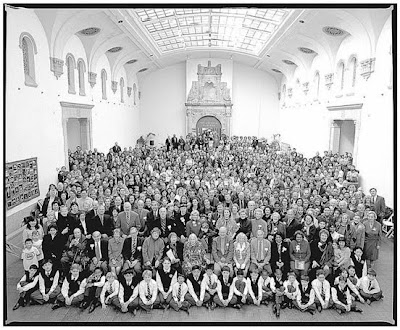 m
Had the good fortune to spend a few days in Point Reyes, California this past weekend working on a story. I'm always excited to discover a photographer who I'm not familiar with who is doing work that excites me. Tess Elliott of the Point Reyes Light turned me on to the work of local photographer Art Rogers and I've been kinda obsessed with it for the whole week.
At first glance, Rogers' bio on his website sounds a bit like a sales pitch from any family portrait photographer....he is shooting in a community and needs to meet the needs of his customers for sure. But one line in his bio so nailed what he seems to really be about:
These portraits transform yesterday and today into stories about generations. The result is a work of art that celebrates change and preserves the passage of time.
Looking at his work, its clear that line is not an exaggeration. This respect for time and how it alters things is woven throughout the work. Keep in mind he is a local portrait photographer...but then there is something much much more. See his work HERE. 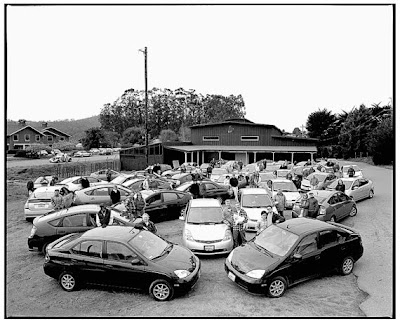 Posted by Timothy Archibald at 12:23 PM No comments: 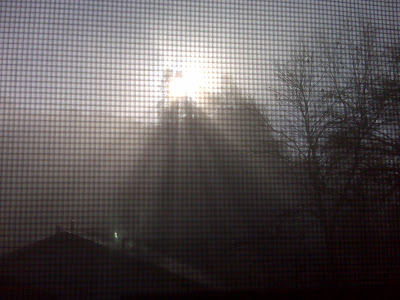 Heaven In The Cellphone, Eli Archibald 2010

Wow....a week went by and the blog has been quiet...I haven't posted anything. What is going on?

My kid took the shot above, had to share that.
m
We are licking our wounds from the sting of a lost job...just gotta be honest.
m
Everyone is all about making a movie these days, and we things are coming together on that front a little bit this week...gotta do some ebay fund raising...gotta learn how to really do all of
this...but we have an idea.
mm
Then wrapped up working for one of my favorite photographers Carrie Levy, who is editing now at WSJ...always nice to be back in touch.
m
And the best part has been spreading the love of ECHOLILIA / Sometimes I wonder. I had the chance to share it with a photo editor on Thursday who had this curious sentiment :
m
It has such a personal feel that I, at times, imagined this was not for me to be looking at. Like not wanting to intrude on a father and son playing a game of catch.
m
I'll just leave it at that.
Posted by Timothy Archibald at 9:54 AM No comments: 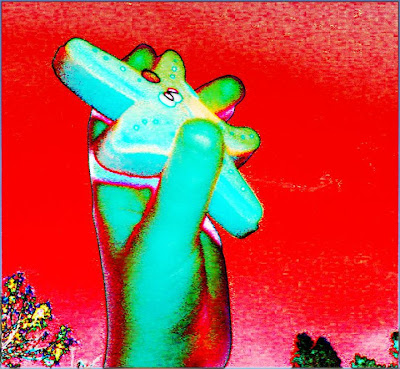 My Hand Holding A Cookie In Red Sky, 2010 by Eli Archibald
m
We knew we had to finish ECHOLILIA when my son started making his own images and working on them on the computer. What does he need me for?
m
This is a new shot from this morning. Kinda red and blue and has a star in it...so I thought it was appropriate. Enjoy.
Posted by Timothy Archibald at 10:01 AM 1 comment: 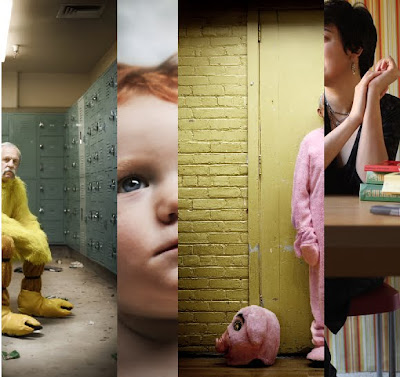 I was getting files ready to print some new images for my portfolio and this glitch occured with these images on the desktop. I liked it and did a screen shot....here ya go.
Posted by Timothy Archibald at 12:45 PM No comments: