Not More Pictures Of Kids 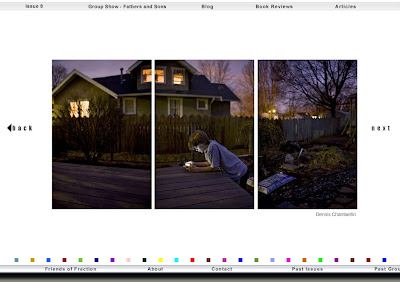 Aline Smithson curated a group show for Fraction Magazine titled Fathers And Sons. Two weeks ago I had a contest of sorts on the blog titled "Everybody Else Week" that focused on parents photographing their kids. After looking at the submissions and then checking out the Fraction show the other day I had this sinking feeling. This genre of photographing one's kid is really, really challenging. When it's done badly, its painful to view. When its done badly, it makes one feel that the genre is really just not do-able.
m
When its done badly by me, it makes me feel like I suck. And I don't mean it makes me feel like my work sucks, I mean it makes me feel like I'm a bad human being. How's that?
m
It is just hard territory. If the work is too warm, it looks cheesy and easily dismissible. If it is too un-emotional, it looks like a potential crime against humanity. Trying to make a photograph, of your own kid, that speaks to people who don't have kids and transcends the genre...it fails more than it succeeds by dramatic proportions.
m
Mocking a kid in a photograph? Letting your biases and negative subjectivity direct a photograph of a kid? Can't you pick on someone your own size? And then those who have been honest about their emotions in their photographs of children have always run into problems for their honesty: Jock Sturges, Lewis Carrol, Diane Arbus. Tierney Gearon...and even the mother-of-all Mom photographers Sally Mann has been criticized.
m
Maybe my defenses are up, but I feel like as soon as an image shows the least hint of sentimentality, I immediately write it off as treading too closely to the Family Of Man genre. And if its harsh....I like it but become suspect of the photographer's intentions...where is this darkness coming from? Is this emotion real or sensational? Was this picture necessary? I wonder that when looking at my own work. In this genre no one can win.
m
Oh...but when it is done well...the resulting image can mean everything. And really the argument is futile, because you gotta do what you gotta do. In this genre, you didn't really choose the subject. The subject chose you.
m
See the Fraction Magazine exhibit Fathers And Sons HERE.
Posted by Timothy Archibald at 9:05 AM

Wow, how is Chamberlin's shot. It has the feeling of a Crewdson... just not as creepy. Or as big a production.

A nice triptych, regardless.

Yeah, its great and totally real.

Thanks for being part of the show.

Hmm. This is a great discussion and great questions.

I found myself reacting to "Where is the darkness coming from?" I mean, parenthood is powerful stuff. For myself, it's the only thing that's so important to me, I push myself to the edges of my sanity. Granted that was really only during my son's infancy, but still. I feel like we'd do well to normalize a little ambivalence.

Regardless, I agree 100% with your conclusion.

On a related note, did you see Sally Mann's new work of her husband on Conscientious? I especially love what she wrote about the project there.

Tim - What a great summary of the pitfalls and rewards of this genre. It's a high-wire act for certain. Thinking about it, I explored the Fraction show again, then looked at Aline's website (spectacular images - and vision!).

One thing that leaped out at me (after much reflection - nothing leaps in my brain), was that the show lacked any teenagers (I have two teen boys in addition to 9-yr. old daughter). I have been so challenged by making images of them that have meaning and import. Perhaps one image in 50 is worth dealing with. With Grace, because of her gender and age perhaps, or just her, I'm feeling a real give and take and a collaboration. Not so with my boys. I've only been photographing seriously for a couple years though and they may not be ready to deal with all that involves. I don't know.

But you have a grasp on it (and will have years of practice and insight going to into your experience with the teen years). In any event, great post - very thought provoking.

Most of the work seems so contrived it makes me long for a simple, straight portrait.