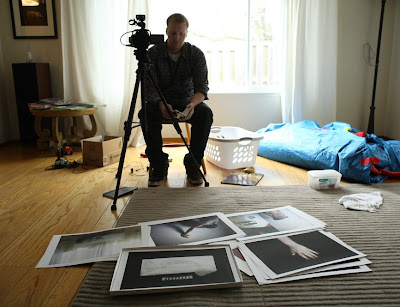 Australian film maker and photography curator Jack Pam parks in my driveway in an old Honda Civic. He rings the doorbell, my wife and son Wilson answer and let him in. He wants to talk to photographers featured in the forthcoming anthology Hijacked - Vol1. New Australian and American Photography that is coming out in April. At first I thought maybe I should have him meet me at some hipster coffee house in SF, like, say RITUAL or something like that, where I'd be surrounded by urban childless scene-sters. He'd be fooled into thinking my life was really like that, I'd gain some art-cred, and we'd all be good. The veil would never have been lifted. Whew.
m
Inspired by the emotional honesty depicted in the Tierney Gearon film, I think it best for him to meet me at home. The chaos: the laundry, diapers, silverware on a bookcase, a deflated jumpy thing sits in the corner. The kids come in an out, Eli is making electronic noises, Wilson is talking like a robot. My wife is getting frustrated with Wilson and he breaks down crying. Eli immediately begins taunting him. Jack tries to ignore the chaos and proceed.
x
JP:What is up with couches?
TA:Yes, we have two of them, one in front of the other.
JP:Why?
TA:Oh, the kids were making a fort or something.
x
Jack references the suburban living rooms and kitchens depicted in Sex Machines and chooses our living room as his staging area. We discuss what ever Sex Machines was supposed to be about, and then dig into the new project, Weird Pictures Of My Kid. Jack tells me his dad, Max Pam, a mega photographer out of Australia, has shot him so much over the years that he'd be recognized at art openings by gallery attendees.
b
Oh...was that the reason for this meeting? Adult child of a photographer comes by to try to understand the work of another photographer who is photographing his child? Is he building a case against me? Ready to punish me for photographing my kid, exploiting my kid, just as was done to him?
m
No, it doesn't seem that way, he never pounces...and he just seems to approve. He leaves me with this observation:
m
Oh, I see. "Sex Machines" was not emotional, it was really about the information. This new project seems to be about the emotion, and the information, the literal stuff, seems to be secondary. Would you agree?
m
I kind of think I do agree. At least for now.
Posted by Timothy Archibald at 4:14 PM

Emotional content is information anyway - so the kid pictures are both. If you don't have that emotional content then there's not that much there I think and you end up with cold projections of adult reason rationality - which has emotions all of its own, but hidden underneath.

One sofa in front of another? You need a third for the roof.

I dunno. It was a neat experience to have this guy, the son of a photographer, come over and look at the work--he was super smart and had done his homework. Right now, I haven't made a photo for this project in about 2- 3 weeks, so I kind of feel I'm stuck or something. I've repeated myself plenty, just have not gotten anything new and good.
It's like I want to stop analyzing it and talking about and just do some more.
Someone asked the other day: " If you got a grant or a big chunk of money to work on a project, what would you do?"
I realized that with other projects, money could help the whole situation, as far as dealing with travel, materials, carving out the time, etc. With this project, money couldn't really help at all.
Just an interesting observation.

Hi Tim - I don't think you're stuck - I just think you haven't made a picture for a few weeks. Your picture making doesn't have to be at a steady rate, especially if it's involving somebody who you have a relationship with outside pictures - it can't be picture taking all the time, otherwise it gets a drag for everybody.

Maybe the project is starting to take real shape, which limits you compared to when it was more open - maybe you do need to keep on repeating yourself - and then differences will arise in that repetition that nails some of the elements you're not sure about.

Stop analyzing it and just do it sounds about right - it all has a shape and it's moving in a direction. Just keep on with it I say.

definitely stop analyzing! you don't need to be articulate when you are in the middle of something--just curious and engaged and open to following your impulses.

putting yourself in the picture (with the dinosaur) was a pretty significant change--i'm curious to see where that goes...

and money always helps--even if it just buys you the ability to say no to a commercial job and spend more time at home with your sons working on this.

Tim, having projects where money won't help sounds ideal in a way. I'm always a little envious of writers or visual artists that can find a pencil stub and create a small masterpiece, but I suppose in the right place photography isn't so different.. and then it's sometimes just a waiting game, for inspiration, for the right moment, for that nice gut feeling. If some of the pictures I've seen recently here are part of the project, it seems like that's going quite well.

For this current project you're talking about, it sounds like something that's a "box" project. I had a conversation recently with a teacher of mine at SCAD, Craig Stevens, and we talked about how we'd take pictures from all these random times in our lives and periodically put them (mentally at least) into certain boxes... pictures with the same mood, pictures with similar subject matter, etc. Eventually, all of a sudden some things would click in our minds and we'd realize we had a small portfolio of a certain type of image, or a gallery show, or something. These projects tended to emerge over time, instead of something that goes directly from concept or interest to being a series of prints/installation/whatever.

It's sort of similar to the difference between my poetry (I guess it's poetry), which gets jotted down on whatever and periodically collected and sorted out, and something like like a long essay on a particular subject. I'm not sure if work of another medium is a great metaphor, but maybe you get what I'm talking about.

Well, if for some reason you ever have to stop photographing, say like all the cameras in the world stop working, including cellphone and laptops... at least you could be glad you also have talent on the narrative area, because I had the read this post without any pause... it was like reading a nice short story by Dickens! LOL Nice post pal.

there is nothing I can say to make comments to the content I read this, and I can only give words of thanks. Here I want to give a little information about the equipment couples alat bantu sex which can be used to help more detai hubungang sex so for those who want to continue this information could come visited in toko alat bantu sex I inform this