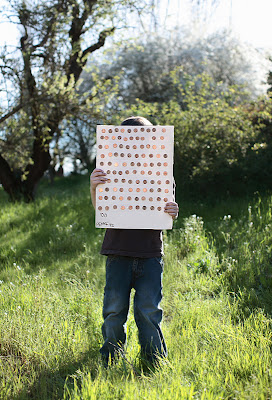 Posted by Timothy Archibald at 11:26 AM

I like it - the sun and grass add something (spring and summer always change perspectives )and so does the writing. Are you going to stick with not showing your son's face, which is a very literal/informational way of photographing - or go into something more low-key that is also more portrait based in a facially expressive manner?

i like the way your son's face becomes the face on all those pennies. That's the first thing that happened with this image when I looked at it anyway.

So...I dunno what the deal is with not showing my son's face, but it does seem to be a constant in the project. Not by design or planning, but it seems to work out that way, for reasons I can't really figure out. But it is obvious that I am embracing that when it happens and just following it thru.

I was asking a friend about that whole no face thing when she was looking at the series and she just kind of felt it made the series universal...or just kind of accepted it as part of the spacey story of this kid. This friend has no kids.
My wife sees it as some way that I'm trying to neutralize or control my son, my feelings of being a father, or something like that thru the photographs. Me...I dunno, but I don't think the look of the photographs is random or un intentional, but I don't know what they mean. Just trying to do, and see what happens. But, it would be nice if I could make an image that shows his face or keeps the lack of face from becoming a gimmick.

I like the idea of the face becoming the one on the pennies.

I think showing the face wouldn't be a gimmick and can reveal or conceal as much as the other images - and doing that stops the concealed faces becoming a gimmick (and there are so many portraits that work on that anti-portrait theme that it is a cliche in its own right) because you know what is being hidden. Or because what is hidden is still hidden even when you show the face. The universal nature will still come through because children, like adults, do have a certain generic quality of age about them.

I love those kind of visual effects... the picture is really nice and I bet your son was laughing at the back.

there is nothing I can say to make comments to the content I read this, and I can only give words of thanks. Here I want to give a little information about the equipment couples alat bantu sex which can be used to help more detai hubungang sex so for those who want to continue this information could come visited in toko alat bantu sex I inform this