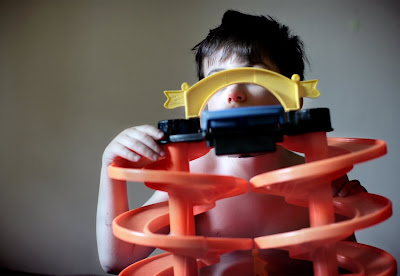 Posted by Timothy Archibald at 9:23 AM

I like this one a lot Tim. Nice light as well as strange robotification of Eli. Bringing to light a little of the mystery of kids who get to live inside their imagination.
e

Hi Emily-
Thanks for reaching out. I would have thought you would have liked the shot of the boy in the plastic case, posted a few weeks back. Right now I'm trying to disguise complex emotions in pretty packaging. I want these things to be attractive and appealing to look at.

Just because it was backlit? Hmm. All images (or most) should be attractive and appealing- even if the subject matter is difficult or the lighting harsh. Do you mean you want to use natural light? I felt that that image was contrived. Like a child would not have chosen to be in there but also like Eli wasn't collaborating- just doing what he was told perhaps? The Cyclotron image seems like something he was interested in but where you made a picture of something else you were feeling/seeing at the same time. Like there is this kid you/the viewer is interested in but can't quite get to. I think this might be a central question for this project- are you documenting or directing? Or collaborating?

Yah...maybe because it is backlit.
Regarding "beautiful", I just don't think a project, like Sex Machines, was about being beautiful, it was about the anthropology of the stuff, the stuff in these people's home, the information.
With this project, I want the stuff to be simple and pretty, not really about the information.
Oh...its a collaboration, and then of course I'm directing.

I guess its just semantics at some point but certainly you were going about making colorful, well-lit, visually exciting (excuse the pun) photos in "Sex Machines". You pulled in your viewers with the beauty of your images, and by bringing you talents to a difficult subject matter. They were not repulsive pictures and they could have been right? You were charmed by the people and inventions and that shows in your images.

"Sex Machines" is an example of beauty in a modern sense (sarcastic?) where the pictures of Eli are beautiful in a more traditional sense. Beauty is inherent in images of children's unblemished skin being hit by natural light. You just had to work harder on a technical level to make the situations in "Sex Machines" beautiful. Taking interesting pictures of children you have to work harder (in this execution) on an emotional level to get the scene to where you want it rather than working on the lighting??
e

Emily-
Yah...you are right, good points made. SM was all colorful and candy, and that helped the lighten the subject matter. In any event, I think you nailed the whole thing here, with the line below:

Taking interesting pictures of children you have to work harder on an emotional level to get the scene to where you want it rather than working on the lighting??

Well stated, thank ya much!