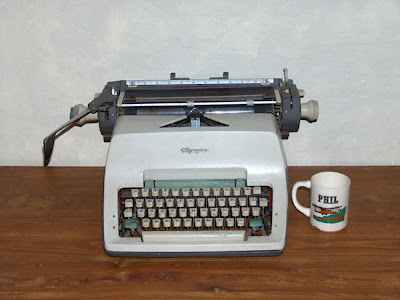 Philip K. Dick's typewriter and mug, courtesy of the PKD Foundation
m
Working on a photograph that is about/includes author Philip K. Dick and wanted to fill in some blanks I had about him. Found this photo above and paragraphs below...thought you all might enjoy 'em:

Born December 16, 1928 in Chicago, Illinois, science fiction author Philip Kindred Dick started off his life with the same disturbing, high-intensity noir eeriness that would later mark his novels and short fiction. Born in a set of twins, Dick was tragically separated from his other half after a mere eight weeks when she died from an (alleged) allergy to her mother's milk. Dick bitterly blamed his mother for the bizarre development, and his lingering suspicion about the way his twin dwindled from the world of the living would leave a deep wound that he carried for the rest of his life. His parents split up when he was quite young, and he was subsequently uprooted and relocated with his mother to Berkeley, California -- where he would remain for much of his life.

Writing like a man possessed, he was ever haunted by the specter of poverty, receiving little payment for his 150 short stories and 36 novels. The need for cash, and the availability of cheap speed, fueled his incredible productivity. In one year alone he produced roughly 30 stories for science fiction pulp magazines like Astounding and Amazing, generally powering through his stories at the rate of 80 to 100 words per minute. Dick said of himself, "The words come out of my hands, not my brain," and, "I write with my hands." 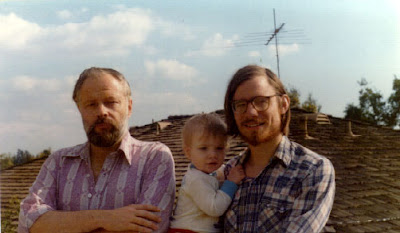 PKD ( left ) and a family friend
Posted by Timothy Archibald at 8:15 AM

My old babysitter was one of he dusted runaways he used to take under his wing. she produced a stage version of Flow My Tear, The Policeman Said.