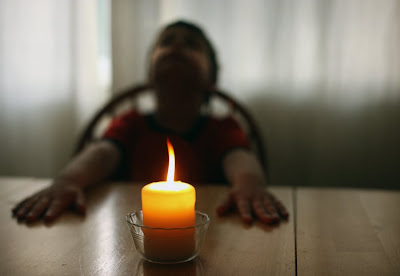 Posted by Timothy Archibald at 10:02 PM

This a beautiful shot - I can look at this and keep seeing new things, textures, shadows.. Great stuff.

This makes me want to carry my camera around more

cade- i know what you mean. i'm having a hard time with the shot of the flowers. i kind of love looking at it, but think that describing it to someone it would sound totally cheesy...so maybe it is? this shot with the candle is similar to other shots on the project: its odd and maybe metaphorical. its not expanding the project any but it is hitting a note and reinforces the tone of the project. but maybe that is just repetitive? is the ball moving forward? i dunno? but i kind of think that if i was looking at this stuff, that hits the same note, over and over, and then i came across an image of a kid sniffing flowers...i think it would carry some weight.
ahh...i dunno. that is why this stuff is fun.

It's a portrait of absorption.

The flower one isn't cheesy at all, though describing it might be. Eli is on the table like a cat sniffing a flower (with no scent - but you never know until you sniff). There's more transparency in the flower one and so, strangely enough, more mystery. We start to see who Eli is.

beautifully done and carries a slightly eerie vibe to it but he light and shadow and focus make a very interesting image. Keep up the great personal work.

Thanks for reaching out Caitlin. Nice blog you got yourself...!