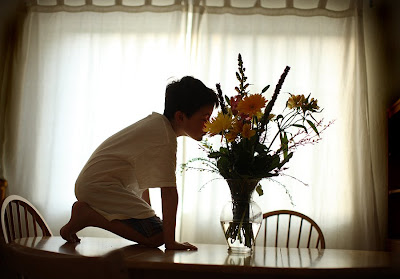 Posted by Timothy Archibald at 1:20 PM

Its backlit and I do like it! Lovely one.
e

It's lovely - being on the table with the net curtains makes it something different to the other work you have made - a sense of the domestic, the suburban and the confined offset by the arranged flowers. And I think its formality will work well with the other images.

awww..come on...does it really fit in to the project, or are you all just suckers for a traditional touching moment?

but in the context of your project it's not a "traditional touching moment" at all! It reminds me of the pincers and the plastic coffin, and it has the same consistent theme of you and your son trying to figure "it" all out.

after all, he's on top of your dining room table--not in your garden. and he is shot with the window behind him--you easily could have walked around to the sunshiny side of the scene.

beautiful isn't the same as pretty. sometimes it is pretty dark and fucked up.

Oh...thank ya all for contributing your ideas here. I do like this photo, I like the idea of a larger range of emotions in this project, and maybe in the right context it fits allows the thing to expand and still not get dumbed down. Thats what I hope.
What Jennifer said is what I hope to have in this project...I like beautiful, but packed with more complex emotions as well. Good when you can get it...

It fits in but it changes what goes into the project - it raises the bar quite a lot. It reminds me of Larry Sultan's dad teeing off in front of the telly (and the curtains).

A good image is a good image is a good image. No matter what thought you put or did not put into it. Successful images rise together. Photography (and art in general) is not an essay contest Tim. And beautiful isn't worse than pretty! Complex isn't inherently better than simple either! Arrr it drives me nuts.
Granted this is your work and if you want it to be complex then, for you- complex is better than simple. But even a simple pretty image (I would actually not call this image beautiful- well I called it lovely and I will stick with that) can bring forth a strong reaction for the viewer. Lots of things in life are simple. Many are not ironic and dismissive even.
Either way- its kind of an odd picture. The styling is a little odd and the arrangement looks like it could be from an event-- we don't know what kind-- and the kid looks like a cat and gerber daisies don't smell so why is the kid (who is big for the table) smelling them? Its complex because you are complex so your pictures will always be complex Tim! Don't worry if someone tells you you took a pretty picture!
e

I too run into the fear that my work will come across as unintentionally sentimental or god forbid "cute"--I suppose that's the danger inherent in taking pictures of children. The good news is that your work is far too complicated to be interpreted as such. Yes, I'm blown away by the inherent beauty in your lighting, focus, etc. that's so consistently amazing from image to image. But there's more to each of your pictures than that. There's a depth, almost an ambivalence--a sense of waiting and watching, a feeling that you as the image-maker are trying to appreciate the beauty that you're seeing but there's a dark undercurrent that you can't get away from, which is what makes it powerful. It's the way our children can be the people we love the most deeply and the ones who absolutely make us want to close the door and walk away, just to be alone. Contradictions are what parenting is about, and it's a side not many choose to present, so I appreciate seeing that element come through in your work. All that aside there's something to be said for showing tenderness in a way that doesn't make it overly precious, which can trivialize the portrayal of affection. Wow, that was longer than I meant it to be!...