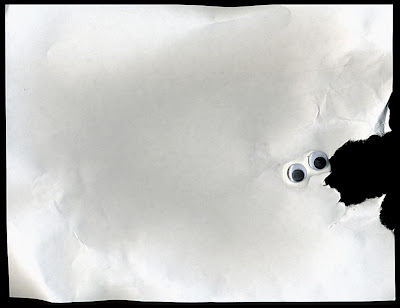 Posted by Timothy Archibald at 10:14 PM

When I showed your blog to my friend Pascalia she made an interesting comment concerning these photos. She said that she really liked, was really touched be these photographs of your boy and that if you took the scanner images out you had something quite special coming together.

I am not sure I agree - I cannot help but think of the playboy magazines with bullet holes from the series "Violent legacies" by Richard Misrach.

Hi Charles-
Thanks for sharing the blog...I love the idea people are spreading this stuff around.
Another friend recently said something similar, that the portraits are the thing with this project and they were confused by the scans, or thought they weren't needed. I guess I'm trying for this yin and yang: I want to look at something with the camera that is emotional and chaotic a little ( haven't found it really yet ) and I want to analyze artifacts from the same life with cool, unemotional distance, thus the scans. Does this stuff work? I don't know really, but this is my kind of working structure I've given myself, and we'll all see what works, doesn't work, rises to the surface or sinks and is forgotten. So, no answer, just wanted to respond. Thanks for reaching out!

For what it's worth, and apropos of both previous comments, the scanned objects, scraps of miscellany and found objects in this series are what draw me to it the most. There's something genuine and original in them, I believe, and partly or mostly due to the fact that I know the photographer/artist/composer took the time to make something of them, to lift them up and say, hey, look at this, and look at what it looks like next to this other thing.
For all of the creative poses and interesting compositions of the photographs, the scraps of paper, the glued eyeballs, the stickers and everything else I guess remind me that the photographs are of a child and are indicative of that sporadic and sometimes spastic realm of childhood creativity. Maybe I just wish I still had the creative energy to sit around with glittery stickers, a glue stick and some googly eyes.
I'm terrible at the internet, but what I really wanted to say is great work and I always look forward to seeing more of it.

Thanks for your comment Aaron. Nice work you have there...what are you up to in Viet Nam?

I have to agree with Aaron: "the photographs are of a child and are indicative of that sporadic and sometimes spastic realm of childhood creativity."

Not only that, but if your child is autistic, or displays questionable behavior suggesting as such, then the quirkiness and randomness of the photos only adds one more dimension to your project; a puzzle of sorts, and a deeper meaning behind the image.

Besides, the title of said project is "Weird Pictures of My Kid." And you can't create a project with this title if at least SOME of the pictures aren't weird, or "off", or just a bit out of the ordinary.

Childhood is not linear and concrete by any means. Rather it is randomly abstract, with priceless moments thrown in for good measure, just to keep things from becoming too ordinary. There's plenty of time for that whenever it is we decide to grow up. :)

So keep capturing those quirky moments, and random bits of life (and stickers and glue and glitter and eyeballs) and keep sharing.

haha my younger brother stayed fascinated with your creativity, but I would like to know how did you make it. I already know the materials, but not the steps to get this result.

Interesting, mysterious and simple, i like it a lot, i wonder if you sell this ?
It seems like to be in a white world or empty world, i understand why people likes something like this very much.

Thank you! I say do it, definitely! Flowers are such a common sticker that you should have no problem finding a set that will work for you. Just make sure you don't get gems like I did. ;) I would love to see the finished mani if you decide to do it! It seems like such a cool idea.
bullet stickers