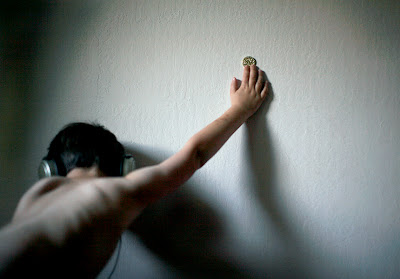 I'm kind of all over the map while I'm working on this project on my son: scans, things on black, regular pictures, all with a consumer grade scanner and digital camera...maybe by design, maybe by default. I think something ties the stuff together, though, but too early to say.

I shot this image above earlier this week. The shots that I control are usually pretty obvious. The shots where the subject totally dictates are starting to have a link as well. The two shots below were done in the manner of the above shot...we agree to take some photographs, my son trys to do things he thinks would look interesting and I point the camera. In 10 minutes we are done and getting ready for school. Here are the two earlier ones, below. 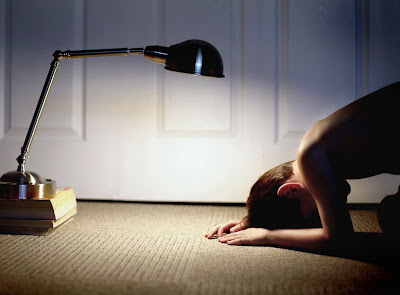 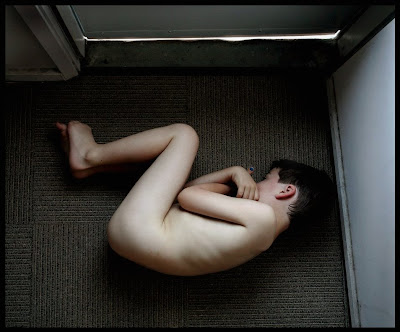 Posted by Timothy Archibald at 10:20 PM

I want to know more... it doesn't have the "take some photos before school" look to me, even if that is what it is. He's a pretty creative model for his age I would say.

Oh...I dunno. Kids are deep and spastic and metaphorical all at the same time.Age five and six seems kind of mystical. These times are few and far between but I think when I allow the kid to drive the photo I'm happily surprised.But again, lots of times we end up with nothing interesting. .. Maybe it comes down to the images where I make the decisions are often calculated, the images where the kid makes the decisions are feral. Buy that?

Well put and insightfull...let me sleep on that and how it sits with me. Hard to look at the shots when you are making them.

Also, if anyone has not seen Colin's work involving kids...or specifically a kid, its super and getting lots of buzz. Look at it at http://www.colinpantall.com

I'm into discovering work by photographers working with kids in a creative and curious way, a manner that honestly emotional, not artificially emotional. Any one have any other suggestions of photographer working like this?

Thanks for that. I'm glad that the honesty is coming through as well as the bond and so on that you mentioned in the photo-editor comments. Simplicity counts for quite a lot too I think and letting the pictures build up over time helps - I sometimes have found it difficult to judge my own work when it is too immediate.

As for people working with kids in a creative and curious way, I still find Wendy Ewald's dream work the most understanding of the complexity of childhood and I have a curious affection for Loretta Lux's work. And Sally Mann, Lewis Carroll in a weird way, and others who are in progress - but what else?

Oh...Arthur Tress has done some super work on kids and a child's world of imagination..he really taps into it. http://www.arthurtress.com
also, someone sent me the link of Nicholas Prior http://www.nicholasprior.com/ who is pursueing the territory, but a bit more realistic and less theatrical.
Do check out their work.

Hey Jennifer-
Yah, all good references there and some new ones for me for sure.

Arbus, of course, got to the heart of the intensity of kids, though never really shot in a series...more just part of her whole thing.