Sendak : There Must Be More To Life 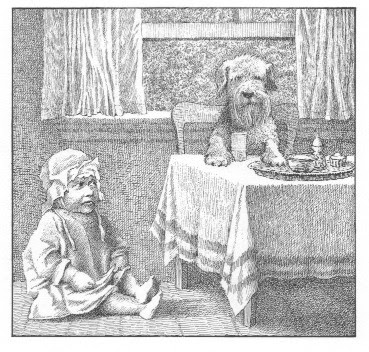 Lots of stuff to think about recently, lots of lines criss crossing that I hope to write about soon. Spent a fascinating afternoon with artist Catherine Wagner last week, had a stimulating evening with photographer Chris Buck the week before and oh yes Tony Fouhse may have a creative enterprise in the works and there may be a project to address there...and then there is LOOK3 coming up in June that I am preparing a multi media presentation for...and really I should be addressing all of those topics. But today I opened the paper and read about the death of Maurice Sendak.

Reading the NYT's, I'm startled by the first lines of his obituary:

Maurice Sendak, widely considered the most important children’s book artist of the 20th century, who wrenched the picture book out of the safe, sanitized world of the nursery and plunged it into the dark, terrifying and hauntingly beautiful recesses of the human psyche, died on Tuesday in Danbury, Conn. He was 83 and lived in Ridgefield, Conn.
The words they used hit hard, sunk in, and then seemed accurate. But wow, what an aggresive description of his work. The visual it leaves you with is hard to shake. Good for him for earning that....and I think he did indeed earn it.

Sendak stuck in my brain in the 90's, long before I had kids. I was reading a book written by The Monks of New Skete about dog training. In the book we have an interview with Maurice Sendak, of all people, who had purchased a dog from the Monks. It seemed at first like Sendak was in there for star quality only. After a few sentences, Sendak takes this whole dog training business in another direction, explaining that humans alway present their real selves to their dogs...they can't wear a mask, they can't fool a dog. And that by digging deeper into that dog/man relationship, we are able to look at our own problems, weaknesses and fears. Sendak explains that mining this stuff is hard, but in the end is fruitful for self growth and for his art. Being an author of children's book, he wants to mine his childhood...or childhood in general, for all of the depth and complexity it has. And he felt that his relationship with his dog allowed him to dig deep and mine for that material.

For me at the time, that was rich stuff. Here was Sendak, gay and childless, but man...he knew his territory. And the books he wrote...I never loved them...they were just too odd, too curious for me, but they seemed to touch on something real that immediately earned my respect. I bought all of them at the time, just to try to figure out what he was doing...and I never was able to grab ahold of it. But it spoke to me.

At the time Sendak's book " Higglety Pigglety Pop! Or, There Must Be More to Life " was the one that was the keeper. An odd tale of a dog that had a good easy life, but left it all to find something more satisfying, stuck with me. Images of lions eating babies, domestic terrors, and a dog who must eat a giant plunger as part of a theatrical performance seemed dadaist and menacing all at the same time. It was hard to read and left me confused. But it did teach me that this childhood thing was deep, it was complex, and it was something that didn't ever need to be dumbed down. 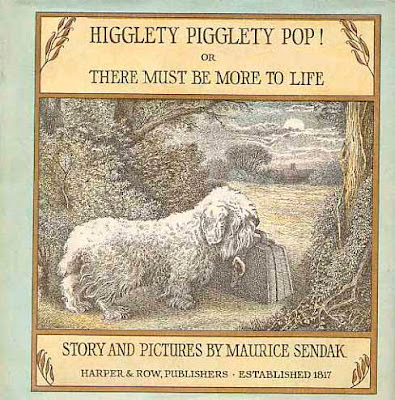 Posted by Timothy Archibald at 10:52 PM