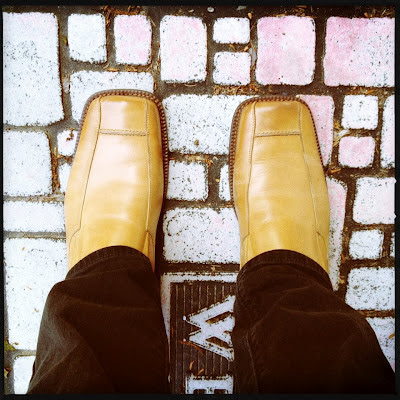 Photographer Chris Buck was coming to town and we agreed to get together. The event necessitated the purchase of a new pair of shoes...I needed my A game to engage with this guy. Is he the defining portrait photographer of our time? I dunno, but his portraits always had the combination of humanity and humor I always found to be inspiring. With all that in mind I had to...ya know, put my best foot forward. These are the shoes that seemed appropriate for the meeting, photographed above.

Chris introduces me to an early mock up of "Presence- The Invisible Portrait", his forthcoming first book, published by Kehrer Verlag, due out in US in the fall. In the words of the publisher it is described as so:

Conceptual and challenging, the concept of the book is highly ambitious. Is anyone going to get this?
Buck is excited and nervous, anticipating the publication of his first book, and one that has taken on such a challenging path. A book of Chris's celebrities would have been an obvious path to follow, a quick elevator pitch. Now the concept of "Presence" you need to ponder...he needs to spell it out to you and you gotta work a bit to get it.

As he talks about his process, he discusses the nature of celebrity, what a viewer brings to that in our culture. For a moment his observations seem like satire, another moment they seem deeply inspired. At one point I need to catch myself, noting the surreal nature of the moment : Chris is describing how he knew the concept of "Presence" had some previously unattained strength once he was able to talk top-tier celebrities such as Robert DeNiro into participating. I agree and see the draw of that. A moment later I have to laugh that this coup of getting DeNiro is made all the more absurd by the fact that his face never actually appears in the book. Like everyone else, DeNiro is hiding and not visible to the viewer.

As I open the book mock-up at the restaurant and I am haunted by the feeling that this ambitious concept is just not going to work...I just may not get this thing. We've had some organic beer and the honesty is flowing.

Truth be told, the book works immediately. It's a visceral experience...the book sets up the rules of the game and the viewer just reacts. It really just comes out of you. You open the book and it's on. Buck has created a project that seems to tap into the viewer's knowledge of celebrity, forces the viewer to bring that to the photograph, and then it rewards them. The brain is stimulated, the viewer laughs or thinks, or is taken back... and then the viewer falls into the splendor of the photograph. The photographs contain Buck's personality and whimsy...his curious observations, devoid of people, but the people, the celebrities, are still a major part of the project. Opening the book and engaging with it is a series of challenges and rewards and the pay off is tangible: you take in a spread, you start visually digesting it...and then...a bit later, when your brain puts the pieces together, comes the reward. 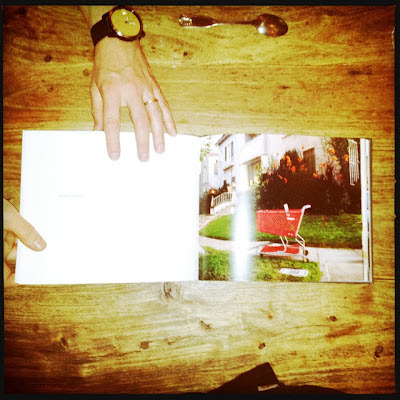 Later that night we are talking about the work of Annie Leibovitz. I never loved her work, never hated her work, but Buck focuses in on it. He is explaining the limitations of these high concept images she was known for in the 80's: Meryl Streep stretching her face, Bette Midler laying in the roses, The Blues Brothers in blue makeup...all of these images stop at one idea. They hand you the idea and it overpowers the person, overpowers the story, it becomes an "idea photograph" and really stops there.

He then brings up Anton Corbijn and the slower and smarter effect his work has on the viewer:

You know, that Corbijn photograph of Joy Division? They have their back to the camera and one guy has turned around to look at the photographer? There is so much to think about there, to project into. You don't just get it and move on. It gets to you later.

We bid farewell and I drive back home. On the drive out of San Francisco I'm wondering why he was going on and on about Leibovitz, Corbijn and this whole difference between the way the images hit your brain. And then, of course, it's clear. That brain delay, that effect where the viewer is rewarded for investing in the image, that quality he saw in Corbijn's work and felt was missing from Leibovitz's work, it's all woven into the series of images in "Presence".

More on this project when it's available. Just quick notes here while it's fresh on my mind. The forthcoming book "Presence- The Invisible Portrait" by Chris Buck. More info at Kehrer Verlag HERE.

Posted by Timothy Archibald at 10:50 AM

What an interesting conversation. I would have bought you each another beer and kept it going until we ran out of beer. Great points and Chris is right on.

Hi Peter-
I don't think anyplace besides one's fridge every really runs out of beer...that said, yah, it was enlightening.