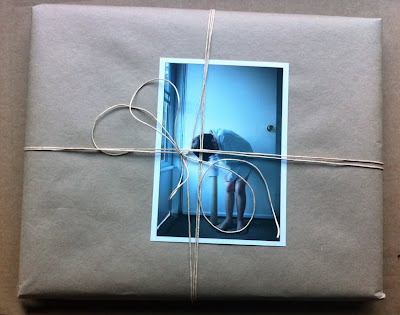 Gift Wrapped Echolilia with Union Invite, 2011
m
Speaking of Colin's book, which is being sent to my home in California from Bath, England as I type this...there are still plenty of copies of ECHOLILIA/ Sometimes I Wonder being sold out of my garage. It is the second printing, shown here in elegant gift wrapping. We sold our first copy of the new year yesterday. Buy it HERE.

Then...I found this insightful review of ECHOLILIA written by John Edmonds. I've been saving it for so long, I figured now was as good a time as any. Enjoy:

So, It's been a while since my last official blog entry and even longer that I've come across a photograph that I really get excited about. It was recently that a good friend introduced me to Timothy Archibald's work. His series and book entitled Echolilia shows photographs of his son and miscellaneous scanograms of his. What struck me immediately about this series was the beautiful contrast of light and dark. I appreciate Archibald's work for his boldness in creating dark, mystifying portraits. Unlike many other photographers who work with their children as subjects creating photographs that have a light, airy quality, Archibald goes for the obscure. Rarely does the art community see a collaboration between father and son in photographs. More often there is a joint effort between mother and child, husband and wife, or photographers and their immediate families, versus fathers working with their own children. I found it quite refreshing that Archibald has been working with his son.

There is a very faint sentimentality in the photographs and a sense of eccentricty that result in an unusual beauty; you can tell that these are dear subjects to him, without feeling as if he is imposing his affection on the audience. The emphasis of form and shape and the anthropmorphic quality of the young boy's gestures and activities make for some of the most interesting photographs I have seen in a very long while. Archibald's photograph's are reminiscent of Ralph Eugene Meatyard's photographs of young boys against abandoned houses and throughout the fields on overcast days; yet, with the same ominous beauty, Archibald's work has a refined, pristine quality to it. 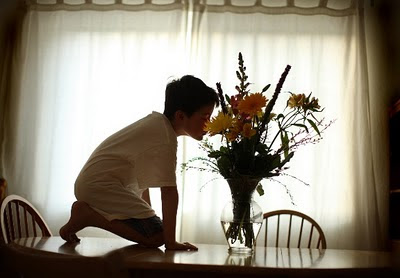 Above is my favorite photograph of the series. There's something wonderful about how ethereal the photograph feels, without having blown out highlights and having an almost silhouetted form. I love the shape of the feet, the line of the boy's back and back light. The boy is on a table in such a suggestive stance that mimics a cat, sniffing flowers; this serves as the photograph's punctum, along with how that one specific strand of hair on the middle of his head mimics the delicacy of the flowers in the vase. I especially like the warmness in the tones, the water in the bottom of the vase and curtain as a framing device. The photographs of in Echolilia are interesting because of the subject's commitment. His personality carries the stories told in these photographs. Whether or not Archibald is directing him, the scenes are very believable. Part of the success comes from leaving the viewer interested in the unknown and curious to know the what is really happening in the images. They're ambiguous in their content, but inviting in their alluring beauty.

That one of Eli on the table is my favorite, too!