Fairy Princess and The New President 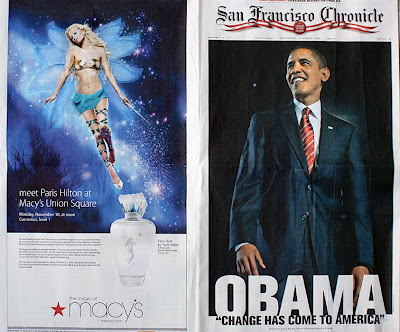 Posted by Timothy Archibald at 8:53 AM

Is this your level of faith in the possibility of change and derision of optimism? He was just elected YESTERDAY!
e

Fellow Americans-
I was totally psyched to hear Obama's acceptance speech Tuesday night. I woke up in the morning, opened the paper and saw this pairing...I had to share! Come on...we are thankfull to live in a country that lets us share our powers of observation! He would get a chuckle out of this in a pop culture kind of way...he would approve!

Have to agree with you here T, no matter where you stand, if you heard this speech Tuesday night and you were not moved you are dead. Also love the irony of this pairing, fun. Thanks for sharing. (What other president would have made the "Mens Health" cover usually reserved for ripped up, 20 somethings? - Crazy times.)

Tim- Its totally fine that you just saw the pair and wanted to share it. Its your blog, you can share whatever you want. But, on the other hand you have been spending years making pairs that you are hoping to tell stories with. Further, you are calling those scanned pairs art. So, here we have another pair. Posing as art right, because its a Tim scan pair.
So, if its art then we look for the message in this day and age. The message is that the idiotic consumption of Macy's Paris Hilton branded perfume is marketed visually in the same way as Barack winning a landslide election that millions of individuals got unusually excited about. Visually its true. Optimism (about a woman's personal beauty and about a new administration) is created visually with both individuals looking like a shaft of light coming out of the dark with sparkly edges. Is it funny? I guess so. Paris selling perfume is pretty different than the message that Barack is selling.

Ultimately the ramifications of art have to do with viewer response. My response was disappointment. You always implore your blog's reader's for their reasoning so there you go.
e

E-
That was a brilliantly well worded response to the piece. I hear you on all points and I understand your disappointment. To me, Art is stronger and more timeless than political trends...its always going to be around to make itself know...it's like the life force.
To see that pairing in the newspaper and hold back, not share it and not let the viewer interpret it as they wish would have been ...um...I don't know how to put it...not a good thing for the life force.
I respect your opinion totally, and I appreciate the fact that you shared it here.

I think it's classic... a great juxtaposition, if I do say so myself.

A good discussion here, too... with lots of healthiness, appreciation and respect. Maybe people are already enlightened by Obama.... er, Paris? Regardless, there is a happiness on people's faces (around here, at least) that hasn't been seen for a long time. It feels good to look up to your leader- probably the first time I've done so in my whole life. I hope that people realize, like was stated, that this is our chance to make change- that it hasn't come yet. Will we continue to unite for the better? Will everyone look at the election process as only the beginning of this "bettering" of ourselves, and our country as a whole? The real challenge starts now...

Super bummed this bird didn't get a copy of that newspaper... especially since they were selling for $50 a pop on ebay later that night! D'oh! A great way to pay for a new 5D Mark II : P