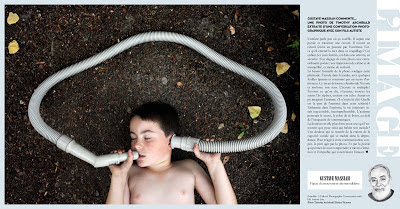 Who is Gustave Massiah?

According to Wikipedia, Gustave Massiah (born 1941) is a French economist, urbanist, and political analyst. He was a professor of urbanism at the French Ecole spéciale d'architecture in Paris, as well as the head of the CRID (Centre de recherche et d'information sur le développement).
Gustave Massiah is one of the founders of the French Attac, of which he had been its vice-president until 2006, and he remains a member of its scientific council.

Regards Magazine in France published his poetic essay inspired by ECHOLILIA to co-incide with Father's Day.

After a challenging holiday, I recieved this on Monday. The gift I was never expecting:


A photo Timothy Archibald extracted from a photographic conversation with his ​​autistic son.
The child speaks where it blows. It sucks a word and transmits a listen. Listens closed circuit through the outside. Does he hear the sea in this shell? This child, eyes closed, is in his world safe. It emerges from this photo extraordinary poetry, a sense of calm and tranquility, and even serenity.

The formal beauty of the photo highlights this fullness. Lying in the garden, with a few scattered leaves and crowned with a vacuum cleaner hose. This diverted pipe messes listening and enhances its meaning. Listening multiplies! Listen to what they say, listen, listen to others! Repeat, listen to the echo. Could anyone imagine autism had it not been said? What proportion of autism in this serenity?

In response to this communication cut, the father is in the picture. And poetry that can understand everything through intuition and empathy that embody love.

Posted by Timothy Archibald at 10:14 PM

Just want to say that I enjoy this blog a lot. I don't usually comment because I don't have much to say that can supplement your blog entries, but I want to say thanks for taking the time to share ideas, observations and your caring perspective.