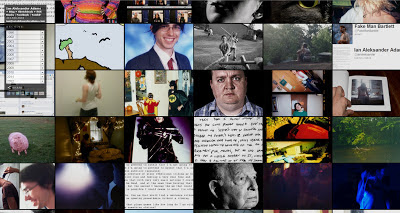 I wanted to start the year off with something we all could just think about. Something that would sit in our heads for a while as we began the year ahead.

Ian Aleksander Adams posted this written word as his status update on December 25, at 10:29 pm.

And as is the nature of the internet, the dialogue that follows is worthy of consideration as well. See that HERE.

﻿
in the mid-2000s i was in a meeting with a new york art dealer. we were discussing my possible show at his venue.

"your work reminds me a lot of [young prominent gay extremely sexualized artist]." he said

"you should send me some polaroids i can curate from, for the show"

i didn't shoot polaroids. young prominent gay extremely sexualized artist was supposedly discovered by this man, and i was, at the time, interested in being young and prominent.

"i should send you some polaroids? i don't really shoot polaroids."

"yeah, send me about.. a shoebox full. send me some nudes and i'll curate a show from them, it will be a great collaboration."

"nudes?" i rarely shot nudes, feeling it was too easy to get a response from an audience and i was obsessed with the idea of subtlty at the time

"yes, some self portraits. i think they'll turn out great."

i didn't really get back to him.

recently i got in trouble for calling out an editor of art forum (unknowingly) in a thread about 'vandalizing' art. the bait was someone saying 'is there ever a good reason to [defile art history]?" my initial comment was "how exactly does one defile art history?" it was deleted before any other responses were made. i was told in chat that the thread was for yale phds only. i explained what i was getting at and told i could post. i did.

the nyu professor critiqued my writing style, "i'm sure rendered in a somewhat different prose style they would be pellucid."

i said "i had a pellucid, but after i swalloed the pell i didn't feel any more lucid [sic]"

then i got serious. i explained my view, a couple points were traded, then the conversation was called useless, historical names were dropped, and i was called an idiot. several people messaged me wondering what this guy's problem was. by internet terms, i was being very polite in my arguments, though also typing very quickly.

the core of the issue was that the gentleman was not used to being critiqued in any real manner. i was told in chat that i should respect him, and out of a desire to be the friend of the person worried the interaction, i tried to make nice. the thread was deleted.

apparently, also, i need to do a background check on every random commenter to see if their snobbery and predictable arguments come from a place of sage wisdom and lengthy career.

there are issues in the art world.

also recently, a young internet dude well known to most of you has talked about how he intentionally destroys his credibility with writing style so his ideas might be the only thing to cling to. another trouble maker has gone to extremes to try and make trolling his practice. there are interesting things going on. chances are, if you're reading this, you're part of what i whole-heatedly admire.

but the vast majority of the creative system has its head up its ass, it's straight fucked.

but you know what i've heard the most grumbling about over the past 8 years of being 'professionally involved'? the fucking tech industry.

what? yeah. 'that fucking techie gentrification.' 'stealing the rights to our images.' 'making it so anyone thinks they're an artist.' 'raising the cost on cs2.'

also recently, i was at the internet archive. some of the greatest thinkers i've ever had the chance to meet perked up as soon as engaged them, trading stories and ideas back and forth as if we were college freshmen. these people invented and are saving the most creatively liberating medium i've ever seen - and they couldn't have given a rats ass about if i had a degree, my experience, my cv, anything. they got me involved, handed me a project, and showed me around their lair.

have i ever been in any arts space, from the most woo woo co-op to the swankiest gallery and felt as welcome? heck no guys, heck no.

is the net art a step in a good direction? you know, i'd like to say it is, but i'm super uncomfortable even calling myself a part of it... and that strikes me as a fair reminder that elitism exists among 'rebels'

if i have to show someone a three page resume [or my dick] before they will listen to an idea i have instead of telling me 'if you want people to take you seriously you need to make actual projects' then there is a major problem with how we are communicating to each other as individuals, let alone as part of the arts industrial complex or as representatives of our 'personal brands'

{apologies for using some of you as examples in this - i believe that points are often best made on the back of actual experience - take it as (ideally) constructive critique.}

Posted by Timothy Archibald at 9:09 PM