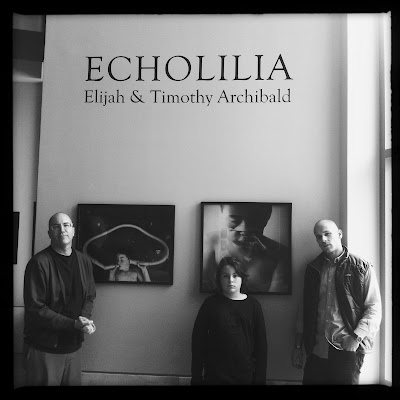 I find myself crammed into the back seat of a Lexus sedan.

Driving is Mary Catherine Johnson from the Emory Visual Arts Department, Brian McGrath Davis, the show's curator and brain behind this experiment. To my left is photographer Sandra-Lee Phipps, to my right is Jefferson Holt, a man of all sorts of artistic endevors. On my lap, all 105 pounds of him, is my son Elijah Archibald. As often occurs in the worlds of art, we all seem to form immediate family. We are here to discuss ECHOLILIA.

The idea was essentially to create a series of lectures that put ECHOLILIA in front of a variety of disciplines....the least important of which was photographers. Eli and I busted out the slide show and fielded questions for The Department of Ethics, The ILA Colloquium, The School of Medicine, The Visual Arts Department, and then a public lecture as part of Atlanta Celebrates Photography, all based around an elegant exhibition in the Emory School of Medicine. Rather than any insights from me at this point, I thought I'd run this story written by Alfred Artis for The Emory Wheel:

Echolilia by Timothy Archibald. The exhibit is displayed in the Emory Medical School lobby until Nov. 30.  The pictures, featuring Eli Archibald, the photographer’s son with Asperger’s, focus on what he deems the dreamy aspects of the autistic mind, while alluding to the relationship between father and son and artist and subject.

The photographer and subject are even more engaging than the photos. In a series of six lectures culminating with a talk at the Emory Medical School, the Archibalds brought wit, personality and whimsy to an otherwise fantastical and captivating exhibit.

“At first I asked why Emory wanted me to bring [Eli],” Archibald said. “Now I couldn’t imagine it any other way.”

Eli’s presence brought to life aspects of autism that film could not capture. He was given a laser pointer, which he shot at audience members and shined in the eyes of the sign language interpreter during the lecture. The interpreter ignored it, but audience members winced. These distractions occurred during the first part of the lecture when the elder Archibald discussed previous work.

Archibald explained his philosophy, found in a newspaper clipping, reading, “If it doesn’t seem like an interesting story, that’s the failure of the listener. I was fascinated with the idea of using the intimacy of photography [to listen to stories],” Archibald explained. “And there was a story in my own home, and I just had to listen.”

Enter Eli, subject and co-creator of the exhibit. He sat on a stool and faced the wall. His father asked him to face the audience. He tapped his microphone to see if it was working. He asked, “Is this thing on?” It was. But with startling aplomb, he said, “Boy, I’ve done this a hundred times.” 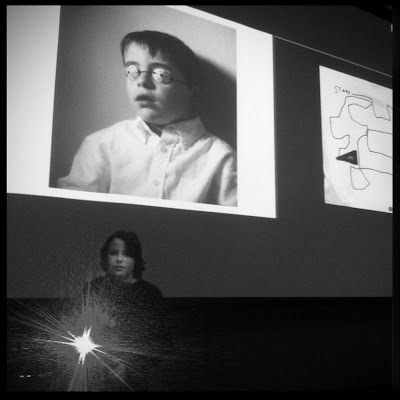 The effect of seeing the subject of the pictures candidly discussing himself brought a new dimension to the work. The exhibit features a maze with no ending that Eli drew. Eli, aware of the flaw, pointed out that “It’s a weird maze because it doesn’t have an ending.” He claims, “I just drew it because I was bored.”

His father, seeing a metaphor, scanned the image. This maze exemplifies their creative process. Eli would do something, whether drawing an endless maze or picking up a stick that looked like a gun, and his father would see a deeper meaning or a good picture and photograph it.

But not every image is spontaneous. Referring to a portrait of an early morning scene Eli said, “My dad didn’t just wake up with the camera on him. He made me recreate it.”

Subtle frustration is present, but it is not the focus, “[just as] it isn’t the focus of any parent-child relationship,” Archibald said. A scanned note reading “I dote like you” and “I hATE you,” written by Eli, captures the tension present in any family, stated in the unpolished voice of a little kid who, due to age, cannot grasp the gravity of his words.

In another picture of Eli, clad in a white oxford shirt, no pants, bending over, face obscured, arm inside a cardboard cylinder propping him up, one sees the surreal that is Archibald’s daily life. The camera’s lens not only shows Eli, but it indirectly shows the father, who was captivated by this pose. In knowing the father is the photographer, the image challenges the viewer to look not only at the picture, but back through the lens at the photographer.

This relationship gives the real weight to the pictures. These are not just slick, fascinating photos, they are a strained view into a dreamy landscape, that, like the father-photographer, the viewer cannot enter but only see through a lens.

Their mirrored body language echoed the relationship shown in the pictures. More than any words, this pose brought to life their bond forged with photographs. 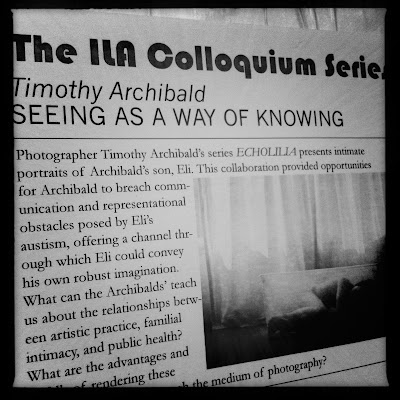 Posted by Timothy Archibald at 5:00 AM

Labels: echolilia, personal history, words of wisdom from others