Photograph In My Sister's House 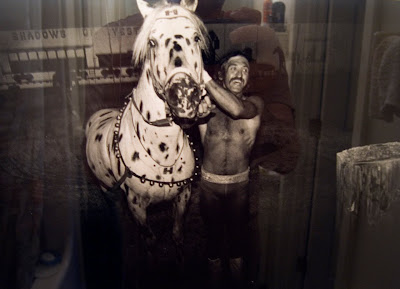 That picture above is really a photo of a photograph...you can see my reflection in the glass. I spent the week at my sister's home in Indiana with my wife and kids. She hung this photograph in the bathroom for me to see and remember.

In 1983 I was 16 and my sister was 29. My parents went to Europe for a few weeks and she moved in to our house to essentially babysit me, hang out with me, cook food, make sure bad things didn't happen...all of that stuff. I wasn't really interested in going to Europe....what would I do there? I was more interested in getting a driver's license, being 16, being in my hometown and making photographs. Big into Garry Winogrand's work and all his images done at events that looked like county fairs, I somehow convinced my sister to drive me to the local county fair, either drop me off or wait in the car while I photographed these circus people who I had spoken to earlier in the week. They had been kind and curious in the day and had told me to come back at night when the show was on...then I'd get some good shots. Somehow it worked out...they gave me all sorts of access but my photographs were terrible...the only good one was this shot done without looking...holding the camera and flash over my head. The guy and the horse and his skin with the Vivitar flash on it....it pleased me because it looked like Arbus, it looked like Winogrand. I liked how it said "shadows of yesterday" in the backround, but mostly I liked it because it was a surprise to me...I didn't know if I had it or not. That photo at the time felt like a gift.

At some point during this past week she asked to see what I was working on now and I showed her the ECHOLILIA book and asked if she had any insights:

Oh...I'm not really deep, I can't express this stuff. But it looks like you have given birth to this transforming shape shifting creature that you are trying to find a way to relate to.

I thought her response was so right on, I couldn't really add a thing to it. 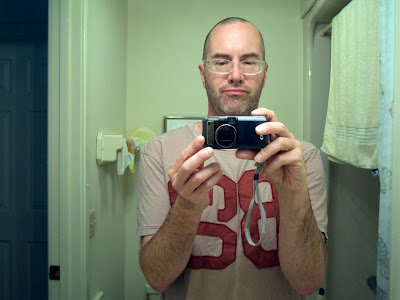