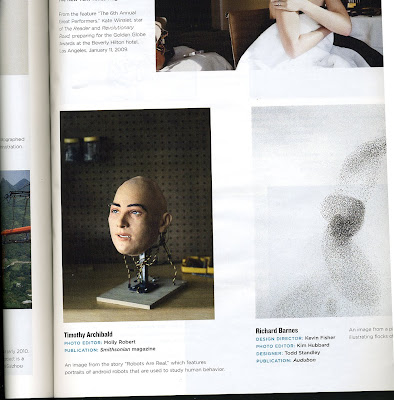 Happy to be included in the PDN Photo Annual. But....lets see...they credited the wrong magazine. And they credited the wrong photo editor. And the photo editor they did credit, who was named in another submission, they spelled her name wrong. But all that said, I do like the image they chose to run from the series. And I love the work of Richard Barnes as well.
Posted by Timothy Archibald at 7:21 AM

SOoooo... you're saying they dropped the ball? Did they call you to fact check, by chance? Is PDN really going that far down hill?

Yea...kinda!
Well, everyone makes mistakes...everyone has an off day. But it did seem a little sloppy to me. And these things get magnified when considering how greatly PDN benefits financially from this contest. But...it is nice to celebrate the folks who hire us ( the photo editors ) appropriately.

Wow. That is so freaking lame.