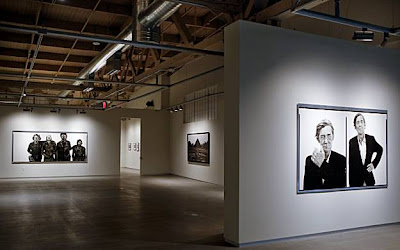 I was surprised I didn't know about this already. Sunday the SF Chronicle had a story written by Sam Whiting telling the tale of Andy Pilara. It starts like this:

In the small world of photography collecting, investment banker Andy Pilara was a complete unknown until the day he walked into San Francisco's Fraenkel Gallery and walked back out with the first picture he had ever bought, a Diane Arbus.
Seven years later, Pilara, 68, has built a collection of 20th century American documentary photography so vast and comprehensive that he had to rent a vacant warehouse on the Embarcadero just to display it.

A quick search revealed that Whitney Johnson at The New Yorker had blogged about it back in March. Where was I? A visit to the Pier 24 website states their intentions so eloquently I had to catch my breath:

Pier 24 has been designed to provide an environment that is open to the public in which photographic ideas, dialogue, and critical thought can be cultivated and shared with the community. Individuals, photographers, educators, collectors, and curators will be invited to explore a venue that is devoted primarily to photography of the 20th and 21st century. Our aspiration is to provide the opportunity to experience, study, and quietly contemplate the permanent photographic collection of the Pilara Foundation.

This gesture and statement seemed so generous, enlightened and so very San Francisco: a guy discovers the power of photography, has the means to collect it, and wants to share it with the world. There is nothing more to say.

Photograph by Russell Yip/ San Francisco Chronicle
Posted by Timothy Archibald at 9:18 AM

What's amazing about rich people and their collections is that they go through the motions of pretending to do something for the public and something charitable by opening their collections for public viewing... and then they make it impossible to visit --- unless you know someone or have some special access group... totally elitist at the end and just another way for these people to boast about what they have under the pretense of charity. Upon trying to book an appointment to see this collection, you end up in a page that says that the schedule has been disabled by the owner BUT if you have special privileges.... you can log in here! They're not even subtle about it!

Try to see the Peter Brandt collection... making an appointment is a joke! And not so different.

In Germany, these foundations are a dime a dozen and all wonderful AND truly open to the public! Except in Berlin, where American-style self-aggrandizement seems to be the tacky new way to show off - i.e. The Boros Collection (of the greatest trendy hits of Contemporary Art - shows off no taste, just money)

Guys, you want to share with the public... do so. But if you want to build a monument to yourself, don't pretend to share it with us and make it impossible to partake.

Fair points made intellgently there, Anonymous. Take credit and tell us who you are!

Not true at all. I have seen every show...the appointments are tough in the first month, but it is worth the wait.

This is a real gift to the city!!

Thanks very a lot for this flawless post;this is the words that keeps me on monitor by way of out the day. I've been looking around to your site after I heard about them from a buddy and was thrilled once I was capable of finding it after searching for long time. Being a avid blogger, I’m glad to see others taking initivative and contributing to the community. Just needed to comment to show
depression treatment my appreciation in your web site as it is vitally difficult to do, and many writers do not get credit score they deserve. I am certain I’ll go to once more and can unfold the word to my friends.

They are always an excellent event, very well prepare and very well coordinated.