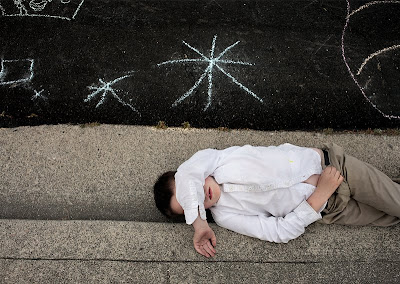 Posted by Timothy Archibald at 8:00 AM

You are a child of the universe
no less than the stars;
you have a right to be here.
And whether or not it is clear to you,
no doubt the universe is unfolding as it should.

When a lawyer poet from Terre Haute Indiana composed those lines for Desiderata it resonated an earnest hope in nearly all who heard it. Our hope comes in the face of uncertainly over our unique place in creation. The question mark ( ? ) is a universal embodiment of these twists and turns a person faces as they mature. In this photograph the boy's body forms two opposing question marks which also frame blindness and chaos characteristic of youth.

Oh, I'll accept that. I just thought his arms looked like an eight on it's side, the symbol for infinity. But I like the question mark idea. Thank you.

dude, anon, you need to come up w/ some sort of handle other than just anonymous. it doesn't have to be anything amazing. it can even be something stupid like "bird."

altho, come to think of it, there isn't anyone else on this thing saying deep, pensive shit in the fashion that you are. perhaps that is your handle.

we will call you "deep pensive shit." (but in an endearing way, of course)

Such a nice one Tim. Lovely palette- a kid being a real kid but also giving us a glimpse into a deeper world without trying too hard...
emily

Love this one Tim, one of my favorites. Really drawn to that imperfect "contrasty" line in the middle, great palette as well. Beautiful, without trying to be. Rock on!