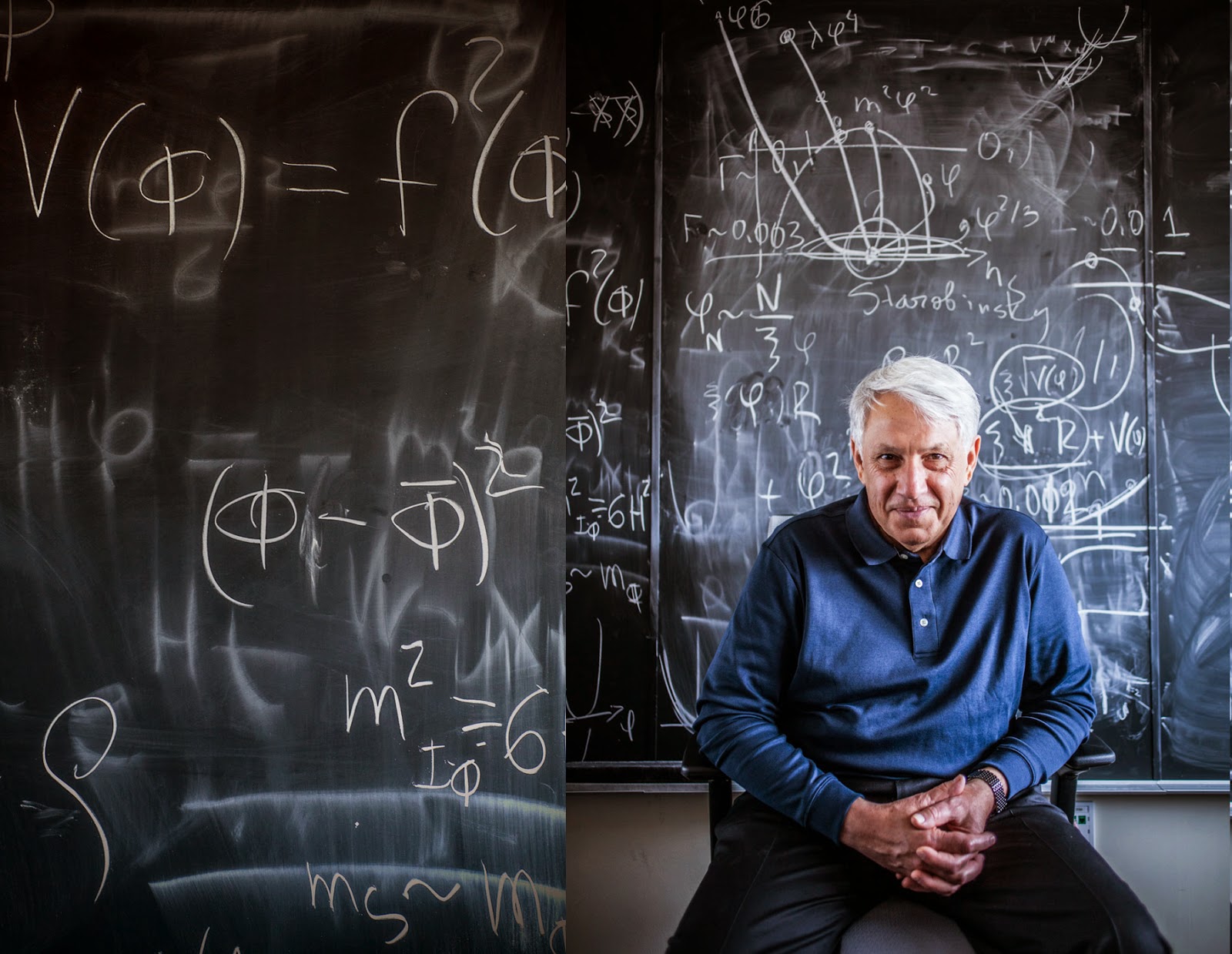 Andrei Linde made time for myself and a writer in his office at Stanford University. The Department of Physics his office is located in had recently been redesigned and made to look like the location of a mid level start-up company: colored walls, lamp lighting, colored rugs...a very contemporary location. The writer and I were underwhelmed. I really couldn't imagine shooting anywhere in this space. I guess I should say I couldn't imagine shooting Andrei Linde in this space.

We enter Linde's office and it looks nothing like the rest of the building. Natural window lighting, blank walls, some text books, two basketballs, and walls and walls of blackboards. It looks as if he asked the interior designers of the building to skip his space...just work around him. We knew this was our location.

Linde opens to curious strangers quickly. Conversation flows regardless of questions. He paints a picture of a young boy, home sick with the flu, reading a science magazine, wondering if a certain theory that occurs to him on that day could be true. A great storyteller of the stories that are only told in science, Linde needs to be interrupted to focus on the portrait session.

The writer I'm working with begins discussing the Nobel Prize. He politely acknowledges the prestige of this but then says this: These prizes such as the Nobel Prize can open doors at points. But I'm looking at possibly being the one who has the theory on how the universe was created. With that in mind these prizes seem very...inconsequential.

Of course, I'm para-phrasing. This is how I remember it, no notes taken. But I think it's very close to a very powerful idea.

Some background on Linde from Wikipedia:

Perhaps the most far-reaching prediction made by Linde was related to what is now called the theory of inflationary multiverse, or string theory landscape. In 1982-1983, Steinhardt, Linde and Vilenkin realized that exponential expansion in the new inflation scenario, once it begins, continues without end in some parts of the universe. On the basis of this scenario, Linde proposed a model of a self-reproducing inflationary universe consisting of different parts. These parts are exponentially large and uniform, because of inflation. Therefore for all practical purposes each of these parts looks like a separate mini-universe, or pocket universe, independent of what happens in other parts of the universe.

Inhabitants of each of these parts might think that the universe everywhere looks the same, and masses of elementary particles, as well as the laws of their interactions, must be the same all over the world. However, in the context of inflationary cosmology, different pocket universes may have different laws of low-energy physics operating in each of them. Thus our world, instead of being a single spherically symmetric expanding balloon, becomes a huge fractal, an inflationary multiverse consisting of many different pocket universes with different properties. This provided a simple scientific interpretation of the cosmological anthropic principle: Our world may consist of different parts, but we can live only in those parts of the multiverse which can support life as we know it.
These ideas did not attract much attention at that time, in part because the anthropic principle was very unpopular, in part because the new inflationary scenario did not quite work and was replaced by the chaotic inflation scenario. However, in 1986 Linde found that in many versions of the chaotic inflation scenario, the process of exponential expansion of the universe also continues forever in some parts of the universe. Linde called this process eternal inflation. Quantum fluctuations produced during eternal chaotic inflation are so large that they can easily push different parts of the universe from one vacuum state to another, and even change the effective dimensionality of space-time. This provided a very powerful realization of the theory of the multiverse.
Posted by Timothy Archibald at 9:17 PM