Andrew Hetherington and Robert Wright came to the LOOK3 Festival Of The Photograph armed with a custom made WTJ TV ( What's The Jackanory Television ) iphone motion/sound system that transformed the duo into the defining Man-On-The-Street interview team. Always ones to enjoy the process of analyzing the scene and being in it at the same time, AH and RW allowed me to share my thoughts as well as premiere my new fully actualized head of hair.

Earlier in April I was pondering whether or not to attend LOOK3. Shouldn't I attend some NYC portfolio review or something? Shouldn't it be more about business than pleasure? I gotta bring home the bacon you know...

Hetherington responded to my desperation and soul searching in an FB post stating :

I remember a time when TA was less about the bacon and more about doing whatever it took to save contemporary photography for future generations...

With that in mind I booked my flight.

Greed surfaced once again, as I headed to LOOK3 with a suitcase full of new shoes, new clothes, a box of copies of ECHOLILIA, a box of copies of Sex Machines : Photographs and Interviews and a Square One system that allowed me to make credit card sales on this stash of books.

Upon arriving it was clear that my luggage was so solidly lost I really was never going to get it back. And that luggage included all of the above. The joke is on me.

Sitting in the audience of the first nights' lecture, I hear photographer Stanley Greene tell a story that ends with the following line: You try to make plans and lock them in place, and sometimes God just says NO.

And that was the lesson of the day. Amen.

Great photograph below of Wright, TA and AH by Max Hirshfeld. See the interview produced by WTJ TV HERE. 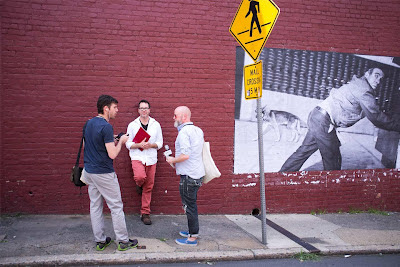 Posted by Timothy Archibald at 2:25 PM

hmmmm, no you've gone and made me feel guilty for heading to NY next week for portfolio reviews!
Nice hair!