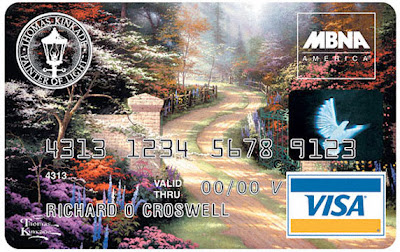 American painter Thomas Kinkade died this weekend at age 54. Forever the focus of critical ridicule coupled with stunning commercial success, Kinkade's career always fascinated me. To see his life end at such a young age was sobering.

In my circles, no one could honestly admit to liking Kinkade. He and his work represented crass commercialism and false sentimentality, and his public embrace of Christian values pushed him further from the art world. He was the opposite of art star darling Dash Snow for sure.

I was always in awe of his accomplishments, even though his art wasn't something I gravitated to. Over the years I've seen how hard it is to achieve anything in the arts, and to see his utter dominance of so many previously untapped niches and markets was stunning. I'm quite confident in saying that there never ever will be a Sex Machines VISA card, or even an ECHOLILIA Master Card, but for Kinkade, it really was just the next obvious step that was meant to be.

I read about his death after not thinking about him for a number of years. I didn't know what I felt, but wanted to dig up and essay I wrote for this blog back in 2008. Reading it over I still stand by it. I've copied it below. Peace. 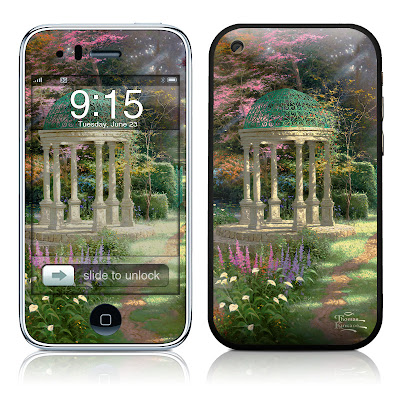 Every now and then you come across a curve ball that surprises you...out of nowhere...just when you thought you had made up your mind on an artist. I spent the weekend working on a project for StoryWorldwide set in Carmel, CA. The area is packed with art galleries of every sort...galleries on both sides of the street...galleries specializing in sculpture, landscapes, dancing sculptures, every niche you can imagine. To my uneducated eye it all looked like schlock- the stuff you'd find decorating a large hotel lobby or corporate building.

Kinkade's work has always been a reference point for me....I've never known why. I think that sometimes one just shouldn't ignore something that has achieved mass success...because there just might be something there. With Kinkade, I never saw it, always mocked it. But this weekend I saw the above image " Snow White Discovers The Cottage , 24 x 36 " and just was moved by it. It's cartoony, its humorous, and sincere all at the same time. Epic in the way that all of Kinkade's work tries to be epic...and then there is this Disney character practically cut and pasted into the space. Here is what Kincade has to say:

...the prince's castle where Snow White will eventually discover happiness looms majestically in the distance, while a foaming waterfall and fanciful animals remind us that she is at peace with all of nature.

Does this statement help it or hurt it? Is it a sales pitch? I dunno...probably all of the above. For whatever reason, it all seems to carry a punch for me and it just feels good to look at it. Sometimes art can live in both worlds, sometimes it can really speak to everyone...though maybe for different reasons. We don't need to pretend we are too cool here....we can admit we haven't seen everything. Art sometimes delivers the goods despite itself. 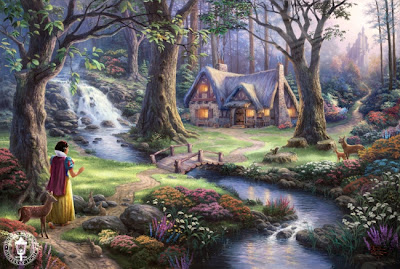 Posted by Timothy Archibald at 2:21 PM

beautifully stated TA. I really appreciated reading this and am glad you reposted.

I can ignore the placement of the cottage. Seems like the worst place to put it if you wanted to avoid a flood. It isn't dreamy, it's a disaster in the making.