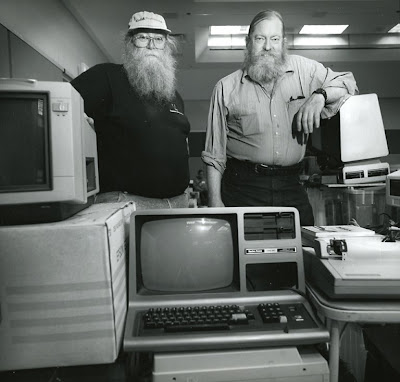 A men's magazine in Russia reached out to me last week about running a series of images from my project The Nerd Convention which was shot in 1999. I think the editor mentioned that their story had some working title called "The Future" or something like that. Sounds kind of funny, sounds kind of grim.
m
While scanning the prints I came across the image above I had forgotten I had taken. Not as good as the rest of the shots...the characters were just not as right on...but it seems strangely relevant right now. The swap meet guys, the pawn shop guys, selling off all of our useless computer hardware for cash.
m
It's odd to me that I still show those images ten years later. Is this pathetic? My reps avoid the shots, they aren't in my shiny new commercial portfolio...they just have no polish or craft, but they still make me feel good looking at them. I recall showing them to my Dad when I made them. He laughed and said " This looks like Photo One...like your first photography class. "
m
I think he put his finger on it...they just look really simple and innocent...something you can sometimes rely on when the subject matter is all right there.

Posted by Timothy Archibald at 12:32 PM

that's funny, tim. . . these have always been some of my very favorite shots of yours. it could be, though, that i'm just very drawn to simplicity in pictures (more so than i am to seeing great amounts of production, at least). it could also be that i'm a big nerd and am glad that other people get excited when they see a commodore 64, too. glad you're resurrecting the out-takes. it's always cool to find a frame you missed from ten years back, even if it doesn't quite fit in with what you're doing nowadays.