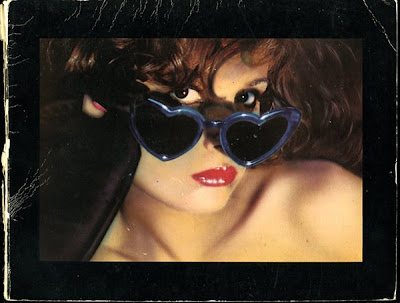 Re-Visions By Marcia Resnick
The resonance this book has had, the various ways you see it's influence reveal itself in contemporary photography always surprises me...it just never seems to die. It seems to be one of the biggies, as influential as "Suburbia" by Bill Owens and the Diane Arbus Monograph. My first photography teacher pushed this work on the students and they ate it up...it was fantastic and surreal, but it all seemed do-able. 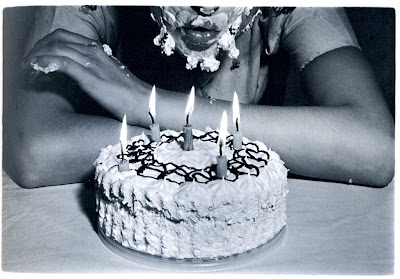 The stuff you are exposed to in the early years sticks with you, burns itself in your brain with the resonance of Beatles' songs...you know the images inside and out so thoroughly you often forget from where they originally came. That is the case with the images in Re-Visions. I've known the images, they've influenced me daily, but I forgot about the book and the photographer until this copy landed. 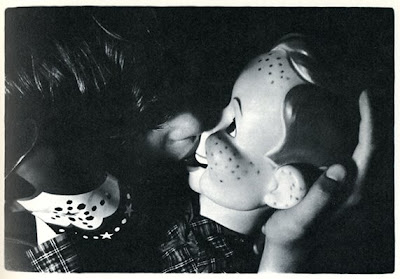 Resnick's images all have the confessional feeling of self portraiture, but I'm guessing none of them are of her. They are conceptual, they are literary fictions, all done with a style of make-shift / thrift store theatricality that just seems inventive and charming. 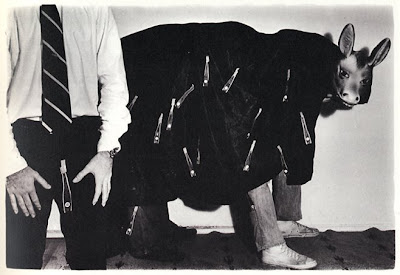 The images were paired with titles that created a third person narrative for the book to follow.
The cake image was titled "She would sneak licks of icing before blowing out the candles on her birthday cake". The Howdy Doody image was titled "She secretly lusted for her television idols". Engaging with some of the images on their own, with out the narrative, can be equally rewarding. The Pin-The-Tail-On-The-Donkey image above looks like it could be a Roger Ballen out-take. While researching the book I found a brief description of the book as follows:
A Lolita-like envisioning of staged photographs of the thinking of a young girl in the third person, dismissed by the photo community, but absolutely wonderful.
That quote pretty much sums it up. Not a surprise that the Camera Clubbers of 1978 would not be able to relate to this book, but I'm pretty confident it found it's audience .
Hard to find, but try to buy some of Marcia Resnick's work HERE.
Marcia's website is HERE.
Posted by Timothy Archibald at 5:00 AM

Wow, blast from the past. I met Marcia and hung out for a day around the time of that book, when I was in school. Cool woman and that was a cool book. Thanks for digging it up. Where'd you find it?

Oh, it was always one of my favorites...and everything is just a double click away...and a credit card of course.

Elaborating a bit, she came to VSW when I was a student there,(77 or 78 I think) and did a lecture / slide presentation of the work. She was smart, funny, a bit of a provocateur almost ala Les Krims, if not as outrageous. Anyway I liked her.